Leader of the Hanzo Academy Shinobi

Asuka (飛鳥) is the main protagonist in the Senran Kagura series. She is the leader of the Hanzō National Academy shinobi.

A second year student at Hanzō National Academy. Her grandfather Hanzō is renowned as a legendary shinobi, and is the academy’s namesake. Given her remarkable pedigree, she has a lot of hidden potential within her and bears a strong sense of justice.

No matter how hard she may try, though, she can never quite bring herself to look as intimidating as she wants to, likely due to her overall bright and positive personality. Over time, she’s become a source of immense moral support for her friends and fellow shinobi.

Asuka is a short girl who has her dark brown hair tied in a ponytail with a white ribbon. Like many of the other females in the Senran Kagura series, she has a buxom figure and is extremely voluptuous, possessing incredibly massive, bouncy breasts, soft thick thighs, and a considerably large, juicy butt.

In her Shinobi attire, she dons a uniform composed of a yellow vest over a white shirt, and a green plaid skirt to match her tie. Paired with it are black thigh high socks with brown loafers, and on each arm is a guard with bandages beneath them. On her waist are straps to hold her swords, and in this form she continues to wear her short red scarf.

Unlike Homura, Yumi, and Miyabi, Asuka does not undergo any significant aesthetic changes. In this mode her hair is simply let down out of its ponytail and she is surrounded by a green aura. The length of her blades are also increased by this aura.

“"We're the same in so many ways, and yet so different. We come to blows whenever we meet. Maybe it's fate."” —Asuka, Shinovi Versus

Asuka is a joyful and friendly girl and believes in teamwork, sticking together and friendship. She often appears to be gullible and clumsy, but she makes up for it with her determination and earnestness.

Due to her maternal grandfather's teachings, Asuka has somewhat of a pacifist nature and doesn't believe in fighting or hurting others unless she views it as completely necessary. Because of this, other shinobi from rival factions often view her as naive given the nature of the shinobi profession which ultimately requires them to take lives.'

Chapter 1 It was a new day at Hanzō National Academy. Kiriya told the group to prepare for training. As they got ready, Katsuragi chuckled to herself as she told Asuka how she saw her rubbing herself with a dry cloth through the window. Ikaruga was surprised about Asuka knowing about old fashioned hygiene. Asuka explained how her Grandpa, Hanzō, taught her the method.

Katsuragi thanked Asuka for the demonstration, which caused Asuka to become embarrassed. Hibari stated how doing it would prevent one from catching a cold. Liking the thought and getting carried away, Katsuragi suggested Asuka to clean herself like that every single day, to the point of doing it naked.Katsuragi's enthusiasm caused Hibari to get enthusiastic as well, but suddenly, Yagyū showed up in a flash while readying her weapon towards Katsuragi.

She felt that Katsuragi was being reckless for inspiring Hibari to do perverted things like that. As Katsuragi questioned why Yagyū had her weapon out, Yagyū stated that she would protect Hibari no matter what. Asuka mentioned how both Yagyū and Hibari are like a couple, which caught Yagyū off guard as she slowly processed what she just heard in her head. Suddenly Kiriya intervened and ended the conversation while also explaining to the group that they'd be doing basic training for the sake of retaining the fundamentals of combat. With that said, the group started their training session.

After the session, Katsuragi stated how it was her intention to have her cute juniors work hard. Hibarisuggested Katsuragi to help out as much as she can. To start, Katsuragi demonstrated her way of helping by groping breasts. In a flash, Yagyū appears again and readied her weapon towards Katsuragi.Quickly, Katsuragi tried explaining to Yagyū how it was a joke, but the reason didn't get through to her. She then asked Ikaruga for help, but Ikaruga declined right away and told Katsuragi how she reaped what she sowed. Hibari then intervened and asked Yagyū if she could come with her to eat some sweets. Yagyū agreed and told Katsuragi how lucky she was to be able to live another day then. Afterwards, both Hibari and Yagyū left.

Sighing in relief, Katsuragi commented on how she'd always commit sexual harassment, even without a head while both Asuka and Ikaruga suggested that the group should always try their best to become a full-fledged shinobi.

She uses two wakizashi, or short Japanese swords although one sword is slightly longer than the other, in combat. She is quick and nimble on her feet which allows her to move about and catch her enemies off guard with her quick and sharp attacks. Her Ninpo utilizes the power of the earth. 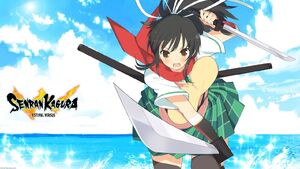 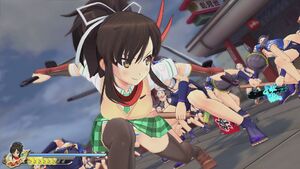 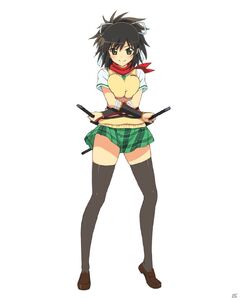 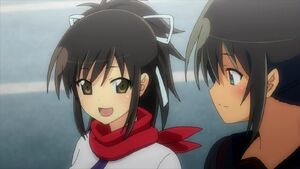 Asuka having a chat with Homura. 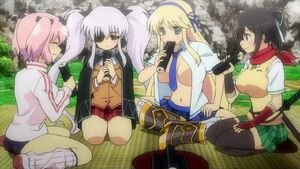 Asuka and her friends having lunch together.