Seito University Hospital Nurse
Member of the Ministry of Health

Stop the spread of the Bugster virus.

Nurturer
Asuna Karino is a nurse at Seito University Hospital and one of the main protagonists of Kamen Rider Ex-Aid. Her true identity is Poppy Pipopapo, a good Bugster born out of the game DoReMiFa Beat, who acts as the "navigator" for the Kamen Riders.

Using the Toki Meki Crisis Gashat and the Buggle Driver II, she is able to transform into Kamen Rider Poppy.

Poppy is a Bugster based on the mascot of Genm Corp.'s DoReMiFa Beat. During Zero Day, she was born from the Bugster infection of an unnamed host whose life was sacrificed in the process, thus making Poppy a complete Bugster. She was later assigned to be a navigator for the Kamen Riders, taking the guise of "Asuna Karino" in order to blend in more easily.

Five years later, a second outbreak of the Bugster virus occurred. While Hiiro Kagami had been selected as CR's Rider, Asuna proposed a second candidate: a prodigious and anonymous gamer known only as "M". While Kyotaro Hinata seemed hesitant, he agreed that having another candidate was wise after the incident that cost Taiga Hanaya his job. He gave her a Gamer Driver and the Mighty Action X Gashat to give M should she find him, and gave her the orders to reopen CR.

Along the way, Asuna ran into Emu Hojo, a pediatrics intern chasing after his escaping patient. Asuna quickly realized that the patient, Sota Suyama, was experiencing symptoms of the game disease, a diagnosis that was confirmed shortly after. For the boy's sake, Asuna had Emu help bring Sota to CR. After touching base briefly with Haima Kagami, she left for Mighty Action X's press release in the hopes of finding M there, only to find Emu had brought Sota to the release. When she tried to take Sota back, the Bugster took over the boy's body, wrecking havoc on the conference. Asuna was forced to explain the Bugster virus to Emu, and told him about trying to find someone to use the Driver, not expecting that Emu would take it for himself. Much to her shock, Emu was not only compatible with the system and capable of becoming a Kamen Rider, but he had been M all along. After watching him defeat the Salty Bugster, Asuna finally showed him to CR, revealing her true form as Poppy and christening Emu as Kamen Rider Ex-Aid. I'm a Kamen Rider!

Soon after, Poppy was contacted by Kuroto Dan, who requested a recording of the Action Gamer's specs as performed by Emu. As such, Poppy had Emu undergo a brief virtual reality simulation within the CR paitent room using a device designed by Kuroto Dan. She promptly left after the simulation was concluded without explaining her reasoning to Emu.

Asuna accompanies Emu on his way to Genm Corp., the intern having been instructed to return the Kaigan Ghost Gashat back to Dan, only to be intercepted by a Collabos Bugster. When Dan is attacked by the Bugster after providing Ex-Aid with additional Kamen Rider Gashats to fight it, Asuna takes him to safety only to lose him as he secretly joins the battle to collect data as Kamen Rider Genm, culminating in the completion of his Ganbarizing Gashat. Part. I: Legend Rider Stage

Poppy Pipopapo later finds the inert Collabos Bugster which she is unable to budge, projecting a blank Game Area which soon enough manifests as Ganbarizing, causing it to come back to life and go berserk before Ex-Aid arrives, allowing Poppy to get away. After Emu uses the Ganbarizing Gashat to destroy the Bugster, both he and Poppy are confused to find that a Game Clear message has not appeared. The Ganbarizing Gashat then suddenly ejects from the Gashacon Breaker on its own before entering the Game Area from which a figure emerged. Part. II: Legend Gamer Stage Though Emu recognized him as Kamen Rider Hibiki, Poppy mistook him for a malicious demon and ran away.

She is revealed to be a final component of the Kamen Rider Chronicle, thus being targeted by other Parad's forces and her mind is altered by none other than the third Genm Corp. CEO Ren Amagasaki.

Now being a part of Kamen Rider Chronicle, Poppy serves her new role as the navigator for the Ride-Players instead. She is later given the Gashacon Bugvisor II and the Toki Meki Crisis Gashat, allowing her to transform into Kamen Rider Poppy, enforcing the game's rules and punishing characters who fail to serve their purpose. Start the New Game! It is later revealed by Parad that Poppy's memory was actually reset, and that her supposedly "benevolent nature" was part of her original programming, as her true purpose was to collect data from CR for the Bugsters. Players Who Bet on Survival

However, it appears that Poppy retained some of her memories which are suppose to be cleared as Poppy was relieved that Emu was saved by Snipe upon Lovrica's defeat.

Poppy was having visions from the memories from her host, where one of them was a young Kuroto told the host that he was developing a way to prevent Bugster infection, so Poppy went to investigate Kuroto's abandoned game studio. Suddenly, a vision of a young Kuroto was passing by, Poppy follows the vision, leading her into a hidden room.

There was a treasure chest in the room, containing a brand new Gamer Driver and the Proto Mighty Action X Origin Gashat. There's also a manual right next to it.

Poppy Pipopapo was created to serve as a guide to the riders in CR. She provides insight on the Bugster viruses, the Rider system, and helps to transfer patients to CR if the situation requires it.

Poppy's true personality is bubbly and energetic. As Asuna, however, she takes on a mature and no-nonsense persona, although her normal personality will momentarily surface if she is addressed by her real name. But there have been times when Poppy as Asuna reverts to her true personality on her own free will. Despite being based on a Vocaloid, ironically, it is revealed Poppy cannot sing very well without music to accompany her and causes distress to those around her when she does.

After being brainwashed by the Bugsters, Poppy still has her bubbly personality, but she seems completely apathetic to the suffering of humans and casually focuses on her job as the "navigator" of Kamen Rider Chronicle. However, if Kamen Riders help the Ride-Players in the "game", which she states is against the rules, she will take on a serious persona briefly with a deeper voice and attack them as Kamen Rider Poppy. When Emu tried to get through to her to snap out of it, her erased memory and programmed loyalty to her kind caused her to knock him aside without a second thought. It is unknown at this time if she can return to normal or if this is a permanent change to her mind.

This form is Poppy's standard form. She usually appears in this form when she decides to change from Asuna to Poppy or already in this form.

This form is Poppy's special Christmas form, and it is only obtained by getting the festive Christmas Energy Item during Christmas time.

This form is exclusive to Ex-Aid Episode 12.

This form is Poppy's fast food server form. She turns into this form during the time she interacted with Burgermon in CR.

This form is exclusive to Ex-Aid Episode 17.

In this form, Poppy's stats are slightly lower than Genm X, putting her on par with a Level 50 Rider. She only beats Para-DX Puzzle Gamer Level 50 in punching power, while losing to Brave and Snipe's Level 50, Genm X, and Para-DX Fighter Gamer Level 50 in terms of punching and kicking power.

Despite these disadvantages, her maximum jumping height and running speed is high, beating every Rider that can use Level 50 and Genm X. She is also shown to be very flexible and agile, easily dodging Snipe's attacks with the Gashacon Magnum and counter attacking.

This form's finisher is the Critical Crews-Aid (クリティカルクルセイド, Kuritikaru Kuruseido): Poppy presses the B button on the Buggle Driver II and charges herself with rainbow energy, before pressing the B button again, causing her to float in the air and twirl around continuously, sending pink heart and yellow star shaped energy attacks rapidly at the enemy. 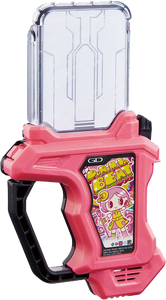 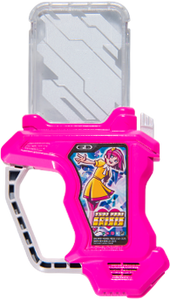 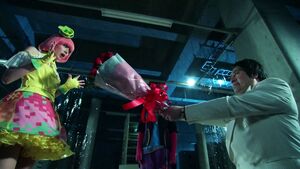 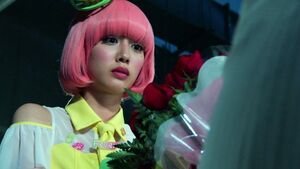 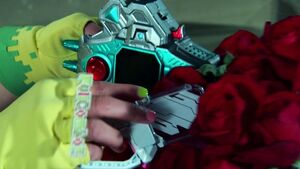 Poppy grabs the Bugster Buckle and Toki Meki Crisis Gashat from the roses. 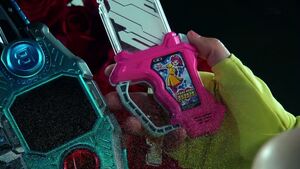 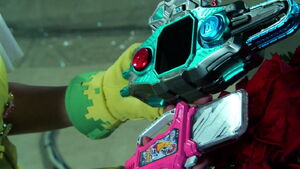 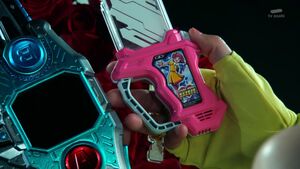 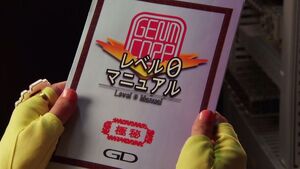 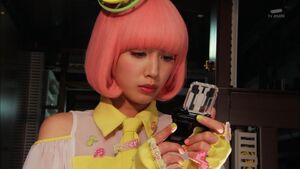 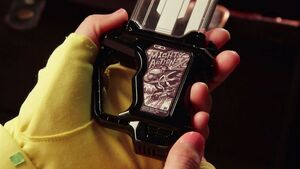 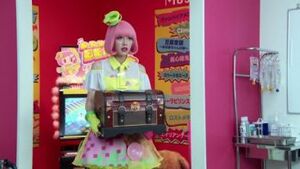 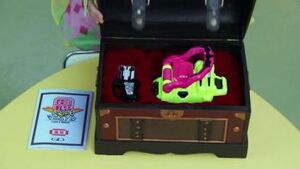 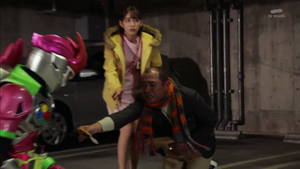 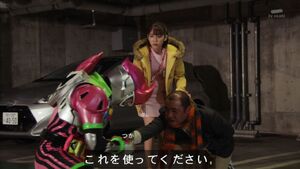 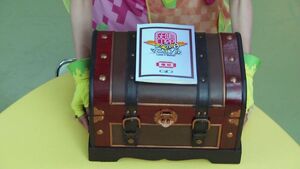 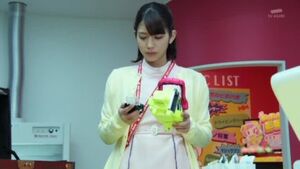 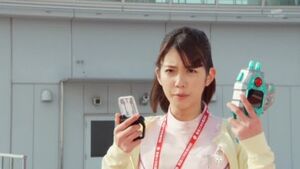