Atago (愛宕?) was one of four Takao-class heavy cruisers, designed to be an improvement over the previous Myōkō-class design. These ships were fast, powerful, and heavily armed. The Takao-class ships were approved under the 1927 fiscal year budget as part of the Imperial Japanese Navy's strategy of the Decisive Battle, and would form the backbone of a multipurpose long range strike force. Atago was built by the Kure Naval shipyards near Hiroshima, and - like all heavy cruisers - was named after a mountain: in this case Mount Atago, located outside Kyoto.

Atago has long blonde hair and large breasts. Like Takao, she wears a blue beret, blue uniform, and black gloves.

She is a Genki Girl who is often seen giggling and is notorious for her big fuel tanks. She shouts "pan-pa-ka-paaan!" when changing equipment. 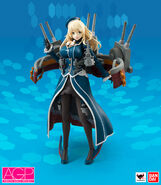 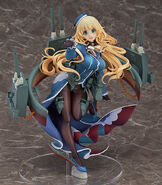 Add a photo to this gallery
Retrieved from "https://hero.fandom.com/wiki/Atago?oldid=1622165"
Community content is available under CC-BY-SA unless otherwise noted.