Greek Goddess of War and Wisdom

Athena is a major character of the God of War game series, serving as the deuteragonist-turned-final antagonist of the Greek Era.

In God of War (2018), she is seen in a ghost form, mocking Kratos about his attempts to change and saying that he is and always will always be a monster, he agrees, but counters that he is no longer her monster, walking through her image and making her disappear.

Of all the Gods on Mount Olympus in the God of War series, Athena is arguably the least selfish and is in fact, very noble. As displayed not only by her deep love for her people and her horror of Ares' siege on Athens, but her deep concern and love for the rest of humanity - as in God of War III she states that she intends to "liberate" mankind with the power of hope.

She also is seen as loving her family - particularly her father Zeus deeply, even sacrificing her own life to save him, although it's possible that she only did so to save the world, as the death of Zeus would mean the death of Olympus, and thus the destruction of the entire world.

She even cares greatly for Kratos, elevating him as a god, shielding him from Olympus' wrath, and guiding him on his quest, remaining his closest ally in all of the games. This is possibly due to her knowledge that Kratos is her brother.

But in God of War III, her motives have somewhat changed. For some reason, she now desires the death of Zeus and motivates Kratos's quest for vengeance. It is possible she was affected by the evil Greed when Kratos opened Pandora's Box, changing her motives for personal gain. However, she did not show any of that evil in God Of War II while she was alive. She also claims to have a message for humanity.

It is unknown what she ultimately had in mind, but it seems that she wished the destruction of the Olympians so she can rebuild the world and rule mankind as the sole all-powerful god. Furthermore, according to Erin Torpey, Athena's voice actress for God of War III, she considers Athena as "trying to do some good to the world, but ultimately wants to take it over," further lending to the possibility that she is not as benevolent as she presents herself to be.

In God of War (2018), Athena while appearing in front of Kratos as an illusion retaining her greed and anger towards Kratos continuously goading him about his terrible past. Kratos at this point however now resented her and was unfazed at her illusion and coldly told her he may be a monster but was no longer her monster.

Athena was very devoted to protecting Olympus and her father, Zeus. She was favored by Zeus among the rest of his children, igniting the jealousy of her brother, Ares. In both God of War and God of War II, it is noted that Athena cares very much for Kratos (possibly because she already knew Kratos is her brother).

Kratos was shown to care about her to a degree, since he was saddened by the fact that he killed her when he tried to kill Zeus. In contrast, Zeus showed no emotion over her death, despite favoring Athena. This may be because he had already been corrupted by the evils of Pandora's Box by this point, and his fear of Kratos may have overshadowed any grief for his daughter.

After her death, something changed Athena. She became devoted to the destruction of Zeus and overthrowing the Olympian order, becoming Kratos' main ally once more, eventually fulfilling the prophecy that he would overthrow Olympus. After Zeus' death, she revealed she intended to drive the world into chaos and rebuild it with the power of Hope. 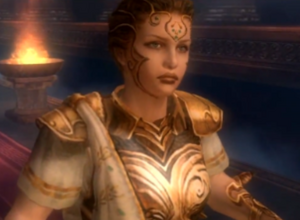 Athena in God of War II 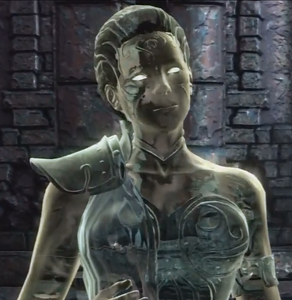 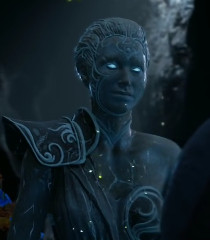