Athena is the heroine from Tom and Jerry: The Lost Dragon.

Tom and Jerry: The Lost Dragon

Athena is a tenderhearted elf girl and the niece of an evil witch, Drizelda, but has dedicated herself to helping animals all over the kingdom.

When Athena is a child, her wicked aunt Drizelda is banished from her village for using dark magic and mistreating Athena. Drizelda tries to get her niece to stay with her, but Athena chooses to stay with the mighty wizard Kaldorf. After Drizelda's plans are foiled and she's sent away, the elves celebrate, but the Elder Elf's wife, Emily, is frightened of Tom and Jerry, whom Athena adopts. Kaldorf raises Athena as his own.

Years later, eighteen-year-old Athena opens up a safe place for animals. She leaves for town to buy food and get donations while leaving Tom and Jerry in charge of the place. She is picked on by bullies and disliked by the other elves, especially Emily, for raising dangerous animals and being related to Drizelda. Athena tends to a donkey after the latter steps on a nail and earns the love of the other elves. Unfortunately, Tom and Jerry fail to stop a hyperactive warthog, Buster, who knocks down a maypole for the upcoming fall festival. Emily brands Athena as a freak and kicks her out of the village. Athena runs home in tears and promises she'll find a place where she, Tom and Jerry would belong.

Deep in the forest, Drizelda's hench-cats, Tip, Pan, and Alley steal a dragon's egg Drizelda seeks but lose it. The egg tumbles into a river. Athena, washing the animals in her home, sends Tom and Jerry to fetch water. This is when the duo discovers the egg on a lily pad and take it home. Meanwhile, a furious Drizelda sends Tin, Pan, and Alley to hunt down the egg.

Back home, Athena instructs Tom to sit on the egg and incubate it before discovering it is a dragon's egg. The egg subsequently hatches and the dragon hatchling mistakes Tom for its mother. Athena names the dragon Puffy and decides to talk to Kaldorf about what to do with it. While everyone is asleep, Puffy's real mother, a giant dragon, searches for her missing baby.

The next day, Tom and Jerry fight while they are assigned to take care of Puffy. Athena speaks to Kaldorf, who makes it clear that she has to take the dragon back to the wild or be banished from the village. Our heroine decides to take Puffy home while she gets a cage for the dragon. Refusing to keep the hatchling, Tom decides to take him to the wild on Kaldorf's orders. Tin, Pan, and Alley launch an attack, but Tom and Jerry save Puffy.

Athena ventures into town to find the trio, but as soon as she arrives for the festival, Drizelda arrives. The evil witch reveals that there is a dragon in the village and that Puffy's mother is looking for him. Drizelda kidnaps Puffy and takes him to her lair, using his fire to absorb power, transforming herself into a monstrous dragon. Emily makes it clear that Athena's home is to be shut down, but our heroine hops on a carriage and sets out to find Puffy with Tom and Jerry.

Athena, Tom and Jerry arrive at Drizelda's lair and are attacked by Puffy's mother. They convince her that they've been caring for Puffy. Meanwhile, Drizelda attacks the village and is about to devour Kaldorf when Puffy's mother, Athena, Tom and Jerry fly to the rescue. Drizelda and the mother dragon engage in a ferocious battle, but Drizelda uses her magic necklace to turn the latter into a statue. Kaldorf tells Athena and her friends that the necklace is to be destroyed. Tom, Jerry, and Athena's animals attack Drizelda before Athena, with Tom and Jerry's help, destroy the necklace with a mallet. While Puffy and his mother are freed, Drizelda's magic backfires, turning her to stone.

As Puffy is reunited with his mother, Athena, Tom and Jerry bid them goodbye. Emily forgives Athena and everyone rejoices.

Athena has green skin and black hair with a white curl. She also wears a red dress and goes barefoot.

Athena is kind and caring to the animals she raises in her home, but she can also be very stern, especially towards Tom and Jerry. She also has a keen sense of right and wrong. Athena is very brave, daring to defy Kaldorf, stand up to Drizelda, and go into dangerous territory when she needs to. 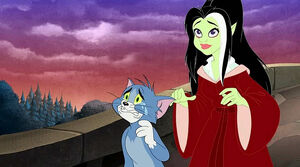 Retrieved from "https://hero.fandom.com/wiki/Athena_(Tom_and_Jerry)?oldid=1951954"
Community content is available under CC-BY-SA unless otherwise noted.