Being with Thomas Curry.

Escape the Trench.
Reunite with Arthur and Thomas (both succeeded).

She is the former queen of Atlantis, and mother to Orm Marius and Arthur Curry. After fleeing from her arranged marriage, Atlanna fell in love with a human named Thomas Curry, and she gave birth to their son, Arthur. Once she returned home to protect her son, she was exiled to the Trench until she escaped and reunited with both Arthur and Thomas.

She was portrayed by Nicole Kidman, who also played Dr. Chase Meridian in Batman Forever, Joanna Eberhart in The Stepford Wives, and also voiced Norma Jean in Happy Feet.

Atlanna is a descendant of Atlan, and presumably during the 1970s-1980s, was forced into an arranged marriage to Orvax, who had become king of Atlantis. In 1985, Atlanna fled Atlantis and escaped to the surface, where she met lighthouse keeper, Thomas Curry. Thomas took her into his home at the lighthouse, and the two fell in love. A year later in January, Atlanna gave birth to Thomas' son, Arthur Curry. However, due to the dangers that would follow her son and having to battle Atlantean soldiers when they found her, she decided to abandon him and Thomas. Before leaving, Atlanna decided to leave her trident as her legacy, so he wouldn't forget where he came from.

Returning to Atlantis, Atlanna remained with Orvax and the two had a son named Orm Marius, who would become the prince of Atlantis. During the wars in Xebel, Atlanna took up Princess Mera, and trained her over the years. Eventually, Orvax learned of Arthur's existence, and overcome with jealousy, sentenced Atlanna to the Trench. Before she was sentenced to the Trench, Atlanna asked Nuidis Vulko to protect and train Arthur, and also teach him of his origins.

Though she was sentenced to die in the Trench, Atlanna managed to survive by going through the maelstrom that was a one-way portal leading to the Hidden Sea. She lived there for twenty years, and created herself a set of grey armor that resembled a Trench creature. In addition, Atlanna attempted to obtain the Trident of Atlan, but was always thwarted by its guardian, Karathen.

Atlanna is only mentioned in Justice League, as Mera mentions that she sacrificed everything to protect Arthur (now known as "Aquaman"). Mera also states that it would have been Atlanna's responsibility to stop Steppenwolf, but it has become Arthur's to stop him and the Parademons.

When Aquaman and Mera were swept apart by the maelstrom, Atlanna rescues Mera from being devoured by a sea monster. Atlanna reunited with Mera and Arthur, and explained to them how she managed to survive being sentenced to the Trench. Altanna and Mera both witness Arthur return with Atlan's trident and armor, and he battles his half-brother Orm. After giving Orm mercy, Atlanna appears and reveals herself to be alive to both Marius and the rest of the Atlanteans. Afterward, Atlanna saw Arthur become king of Atlantis, and reunited with Thomas at the pier.

Atlanna is compassionate and brave, as she loved Arthur deeply enough that she returned home to protect him.

Atlantean-Physiology: As an Atlantean, she posses superhuman abilities, which is possibly heightened since she was once queen of the seas. 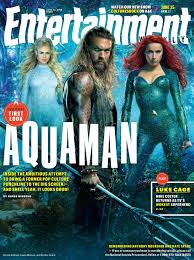 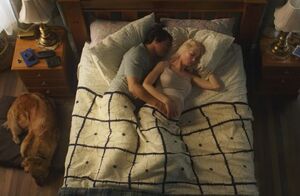 A pregnant Atlanna with Tom.

Atlanna speaks to her son, Orm, after his defeat.