The Atom (real name Dr. Ryan Choi) is a fictional superhero from the DC comics and universe. He is the fourth iteration of the Atom, taking up the mantle after Dr. Ray Palmer and became a member of the Justice League.

He was created by Grant Morrison, John Byrne, and Gail Simone, and first appeared in Brave New World # 1 in August of 2006.

Ryan Choi was born in 1983 to unnamed parents, and later emigrated to the United States from Hong Kong following the death of his mother. Choi was asked to take up Ray Palmer's former position at Ivy University, but Ryan and Palmer knew each other since he was young. It's revealed that Ray left him with the legacy of the size-changing belt, and Ryan collected the belt and intended to explore the microscopic world.

In his first adventure, Atom fought an alien creature known as the Waiting, who was native to a sub-microscopic dimension. The Waiting had agents who intended to install a mind-control device into the President of the United States' dog, Duster, to control the president's actions. The Atom shrunk himself and fought several of the alien agents, and was able to stop the agents' plan to control the president. This wasn't the first time he encountered the Waiting, as he came across the alien when he collected Palmer's bio-belt. In addition, Choi also came across a monstrous creature called M'nagalah, and he and the Waiting saw Ryan as a critical figure in their war. The two attempted to make him join their war, but Choi managed to avoid being captured, and later fell with the Ivy Town's University's Dean Mayfield.

Dean Mayfield attempted to persuade Ryan to return home, even bringing his father to convince him. After an attack by the Waiting, Ryan learned that the war between science and magic was about to begin and that the Waiting launched a sneak attack on the United States President. However, Dean Mayfield intended to make sure science won the war, and recruited Sylbert Rundine as an agent, giving him a bio-belt and giving him the name, "Dwarfstar". It's later revealed that Mayfield was working for Chronos, who provided bio-belts and also caused some of the situations that Choi found himself in.

Upon his return to Ivy Town, Ryan found himself fighting Dwarfstar, whom he managed to defeat by removing his bio-belt despite receiving severe injuries. Afterward, Atom convinced M'nagalah to honor a truce if Ryan could get the Waiting to withdraw form the war, and managed to force the Waiting to retreat by revealing he knew how to defeat him. Choi was later involved in the search for the missing Dr. Palmer, and traveled into the multiverse along with Donna Troy, Red Hood, and Bob the Monitor. After being plucked back to new earth, Ryan left his role of dimension hopper to Kyle Rayner, and returned to defend Ivy Town from a monster invasion.

Atom later discovered Chronos' manipulations with the help of Lady Chronos, who was a future version of Ryan's first love, Jia. Ryan learned that the bio-belts worked by injecting matter borrowing "worms" into the wearer's bloodstream, which could change the size and weight of the individual. It's also revealed that Chronos manipulated Ryan into believing that Choi had communicated with Ray Palmer, and the Atom bested the Chronos couple and restored Ivy Town. Palmer gave Choi his blessing, and the two were later employed by Checkmate to activate the Black Gambit to transport the last free humans on Earth-o to another universe. Despite receiving Ray's blessing, Ryan decided to create new identity for himself, but Palmer told him ton continue using the Atom title.

In "Brightest Day", Ryan returned home after fighting the Floronic Man, and was confronted by Deathstroke and the Titans. During the fight, Choi was beaten by Deathstroke, Cinder, Cheshire, Tattooed Man and Osiris. It was believed that Ryan was killed during the fight, but it was revealed that he was somehow trapped in a miniverse where only Palmer could hear him. Apparently, Ryan managed to shrink a part of him before Deathstroke could kill him, and his soul went to that part.

On Prime Earth, Choi is a teaching assistant to professor Ray Palmer at Ivy University, and also became Palmer's confidant about his superhero career. One day, Palmer became trapped in a remote location and sent Choi a single message for help, asking him to use a bio-belt to rescue him. Afterward, Choi was recruited by Batman and Lobo into joining the Justice League of America II, and later helped recruit The Ray to the team. 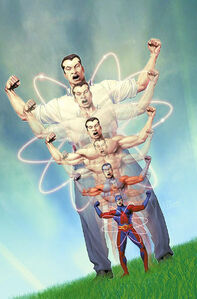 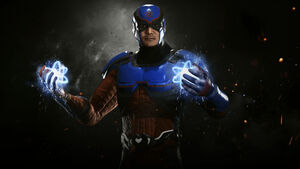