The Atom Smasher (real name Albert Julian "Al" Rothstein), formerly known as Nuklon, is a fictional character and superhero in DC Comics. The grandson of Cyclotron and the godson of Al Pratt, he is a metahuman with the ability to grow to giant size and a member of the Justice Society of America.

He was created by Roy Thomas, Jerry Ordway and Mike Machlan, and first appeared in All-Star Squadron #25 in September of 1983.

Originally 1980s hero Nuklon, young Al Rothstein was a nice, unassuming guy in love with his engaged teammate, Fury. The 7'6" young lad eventually moved on to the Justice League of America and Comics Limbo, before debuting the "Atom Smasher" name & look and coming to the authentic JSA. Still a nice guy, he reacted poorly to his mother's death at the hands of Kobra, and hooked up with Anti-Hero Black Adam, eventually being twisted to his ways, and he left the team in a huff. Later, after betraying the team to join Black Adam's crusade, he asked to be let back on, and does a lot of this, offering his life to The Spectre so the people of Kahndaq may live, and fighting against Adam when necessary. The team has differing points of view on him.

Albert Julian "Al" Rothstein is the son of Phillip Rothstein and Terri Kurtzberger, and is the godson of the first Atom, Albert Pratt. He's also the grandson of Terrance Kurtzberger, who was briefly a forced villain known as "Cyclotron" before his sacrifice.

Rothstein was raised to become a superhero like his godfather, but also went to the University of Southern California on a basketball scholarship. Though great in athletics, Al decided to follow in Pratt's footsteps and took on the name Nuklon when he became a member of Infinity Inc. under the leadership of Skyman. Al worked on trying to prove himself to his teammates, as he wanted to uphold Pratt's legacy following his godfather's death. He would then become a member of the Justice Society of America, and changed his name to Atom Smasher. Upon joining the team, he became friends with Pratt's son Grant Emerson, and acted like a brother figure to his connections to his father. He also learned that his teammate, Stargirl, had developed a crush on him, but didn't reciprocate them.

When his mother was killed by the villain Kobra, Al mourned her death and turned vengeful, managing to get her back by going back in time and placing Extant in her spot. Afterward, Atom Smasher developed a friendship with Black Adam, who reformed his image and joined the Justice Society. The two eventually got fed up with the team's refusal to push their morals, and quit to kill Kobra and invade Kahndaq to overthrow its dictator. During the invasion, Atom Smasher killed the country's president and battled the Justice Society. Rothstein then made a truce with his former teammates, that Black Adam and his allies gained control over Kahndaq, but couldn't leave the country.

While in Kahndaq, Rothstein started to question Black Adam and his goals, but remained in the country until he was killed by the Spectre. He was then revived by Adam and brought to the Justice Society's headquarters, and later imprisoned due to his crimes during the invasion of Kahndaq. While in jail, Rothstein was greeted by Amanda Waller, who was aware of his friendship with Adam, and had him join the Suicide Squad to stop him. The Suicide Squad battled Adam and the Black Marvel Family, but Al was defeated by his former friend during the fight. He re-joined the Justice Society to stop Adam, but failed to reason with his former friend, who admitted to committing genocide in Bialya. When Adam lost all of his powers and started to find a way to bring back his wife, Rothstein brought him her corpse and told him to go into hiding. Despite failing with this, Atom Smasher managed to convince Adam to revive the Wizard Shazam when he overthrew Shazam for the Rock of Eternity.

Atom Smasher was erased from existence due to the actions of Doctor Manhattan, but was restored when the doctor allowed Alan Scott become a Green Lantern. Following his restoration, Atom Smasher helped Superman deal with metahumans, and became a reserve member of the Justice League.

Already super strong at his normal size — 7 ft 6 in, or 2.3 m — (though recently he has been depicted as being of a more normal height when not using his powers), Atom Smasher's strength and density increase proportionately to whatever size he chooses (it was explained in JSA #75 that his muscles and bones actually break and reform as they grow in order to achieve these great heights). 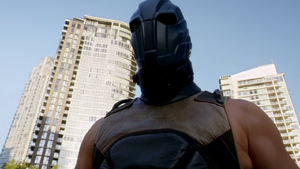 Atom-Smasher in CW's The Flash. 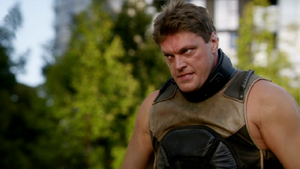 Atom-Smasher unmasked in CW's The Flash. 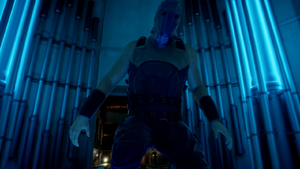 Atom Smasher fights against The Flash. 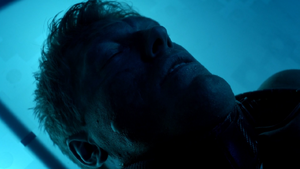 Al's death in CW's The Flash. 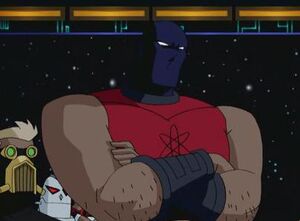