Trying her best to surpass her rival Diana (formerly)

Atsuko "Akko" Kagari is the main protagonist who made her first appearance in the short film Little Witch Academia and later, its sequel Little Witch Academia: The Enchanted Parade and reboot anime TV series titled Little Witch Academia. She is a young witch in training who is joining a school for witches called Luna Nova Academy. Due to her normal human background, she struggled to study magic and tried her best to become the best witch like Shiny Chariot in spite of the said witch being denounced as a fraud due to her ways of using magic for her shows bringing unwanted views on witches in general by normal humans.

Akko usually appears smiling, or with exaggerated facial expressions. She has large brown eyes and an average tone of skin.

Akko's hair is long, straight, and chestnut brown in color. It reaches about just below her shoulder blades in length, and her bangs are cut about her eyes. Akko has a section of hair tied onto a half ponytail on the back of her head.

Akko is described as a very cute, optimistic and energetic girl. She's always up for a challenge, even if it seems too hard for her. Akko is very immersed in her own ideas and fantasies, and often doesn't take other people's opinions into account. She's headstrong and stubborn and has a short fuse.

Akko is very social and people are drawn to her happy disposition.

Akko has an idealized view of witches inspired by her childhood idol Shiny Chariot, which clashes with her fellow students' "views". Being her fan, she has a poster of Shiny Chariot in her room, and the concept of Shiny Chariot is often used in her fantasies. It's worth mentioning that she's also very immersed in her own fantasies and sometimes doesn't take other people's into account. This trait was toned down for the TV series, but it is still evident. But it doesn't mean that she is arrogant: In the OVA, Akko realized that she went too far when her friendship with Sucy and Lotte was jeopardized, and thus was saddened with what she just did.

Despite her impulsiveness, ultimately Akko is a selfless witch who will risk her own self and her reputation to do what is right such as during the 7th episode when she used her last bit of magic in her wand to break open the fishing cage to save a fish's family rather than using it later when they find Pisces (although she coincidentally found Pisces in the cage), the 5th episode when she convinced her friends to go with her and take back the Sorcerer's Stone from the dragons, and during the 8th episode when she volunteered to be the "sacrifice" to go into Sucy's mind and wake her up.

Though she has a little discipline for study and finds most classes to be boring, Akko is in fact very clever. This is first seen in Episode 1 when she lures the Cockatrice so that it is entangled in the vines of a mandrake plant. In episode 4 she gets Lotte into the city by catching a ride in Luna Nova's food delivery truck. And in episode 9, she is able to quickly bring Mr. Holbrooke to Luna Nova Academy by grabbing onto the Bell Tower's bell and using an Object Repairing Spell to reunite it with its clapper, knowing the clapper is on campus as Miranda Holbrooke's staff.

Compared to the rest of her fellow witches, Akko was not competent with magic, let alone using flying brooms (in the anime, it's also the result of Croix Meridies' Noir Fuel Spirit Plan by tricking Chariot to use Dream Fuel Spirit on her), but her potential with magic and determination to master them is unmistakable: She can use the Shiny Rod that once belonged to Shiny Chariot with impressive prowess, both to turn it into a bow and arrow form and the huge ballista form. Whether this magic potential was already present in her or not is unknown, but in the manga prequel, she uses a mandragora potion to gain access to magic. Hilariously, lack of experience with her newfound powers resulted in her accidentally triggering a powerful explosion that nearly killed her along with Sucy and Lotte. 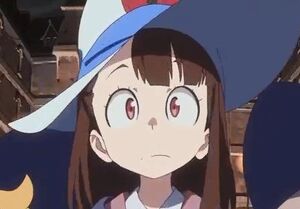 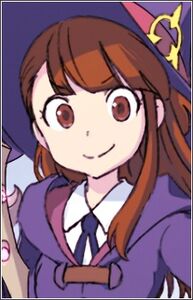 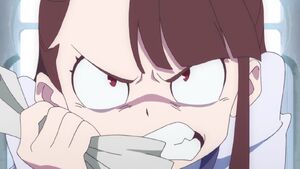 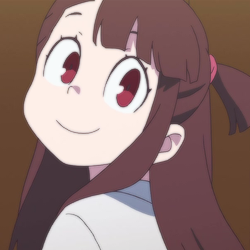 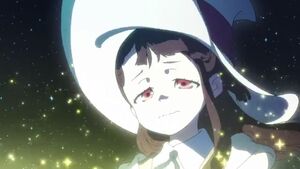 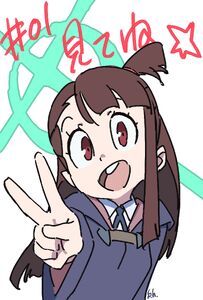 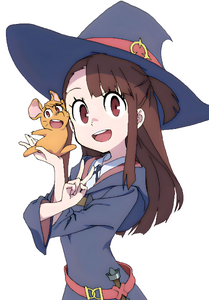 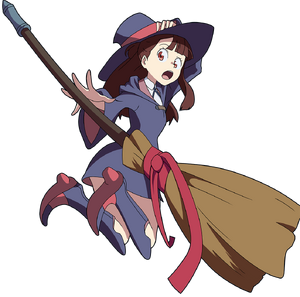 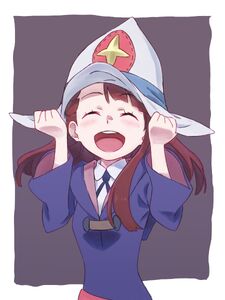 Retrieved from "https://hero.fandom.com/wiki/Atsuko_Kagari?oldid=1807675"
Community content is available under CC-BY-SA unless otherwise noted.