Atticus Finch is a protagonist of the best-selling 1960 book and 1962 movie, To Kill a Mockingbird, and a major character its 2015 sequel novel Go Set a Watchman. He is a widowed lawyer who lives in the "tireold town" of Maycomb, Alabama, whose job is to defend an African-American man named Tom Robinson after he was accused of rape.

In both the book and the movie, Atticus Finch is a widowed Depression Era lawyer who lives in the "Tired Old Town" of Maycomb, Alabama. Wise and caring, he fathers two children, Jeremy "Jem" Finch and Jean Louise "Scout" Finch.

The town's judge appoints him to defend a Black man named Tom Robinson, who is falsely accused of raping a teenaged girl named Mayella Ewell. Despite protests from most of the town, Atticus agrees to take up the position.

The town begins to turn against Atticus in the period before the trial, in one case a mob threatens to lynch Tom for the yet-to-be-proven crime before the trial occurs, but this is prevented when Atticus' kids convince the mob to view the situation from their point-of-view, causing the mob to disband.

During the trial, Atticus goes to many lengths to prove that Tom is not guilty. He and Tom manage to take the upper hand at first by disproving many of Mayella and her father Bob's accusations. It is later revealed that Bob has been sexually abusing Mayella for years, and gave her a savage beating upon seeing her flirt with Tom.

Despite evidence presented against the Ewells, Atticus and Tom ultimately lose the trial, as the all bigoted jury convicts him. Atticus is initially disappointed in the loss, but he is later shocked to learn that Tom was later killed when trying to escape from prison, causing him to believe that there is no faith in justice in his town.

Fortunately, Atticus' accusations at the trial taint the reputation of the Ewells in the community, Bob, who is enraged by Atticus' claims against him and his daughter that he spits in Atticus' face as he leaves the courthouse as a sign of swearing vengeance against him and his family.

Atticus' beliefs that Tom was innocent and Bob was the real culprit of raping Mayella are later implied to be true after Scout and Jem are attacked by Bob as they are returning home from a Halloween pageant, he is later killed in the struggle by town recluse Boo Radley.

When Sheriff Tate arrives at the Finch household, the two have an argument in which Tate threatens to arrest and charge Jem and/or Boo with killing Bob Ewell. To secure both his son and Boo's innocence, Atticus convinces Tate that Bob died when he fell on the knife that was found at the scene amongst the struggle. At an impasse, Atticus successfully defends both Jem and Boo when Sheriff Tate reluctantly accepts Atticus' story and leaves.

Atticus is very polite and compassionate. Unlike most white individuals in his town, he has a strong stance fighting against racism and devotes himself to an anti-racism philosophy. When Tom Robinson, a black man is accused of allegedly raping a girl, he quickly vows to defend him at all costs, regardless of whether or not he loses the support of much of his town. 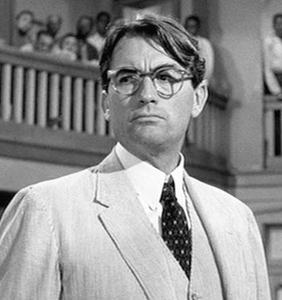 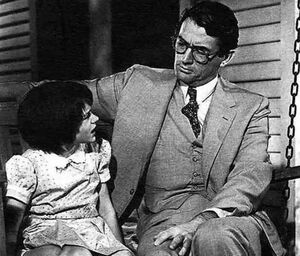