To plant the trees for the people in Thneedville (succeeded)

Audrey is a 14 year-old girl and the tetartagonist of the film adaptation of Dr. Seuss' The Lorax. She is the neighbor who has red hair and green eyes and the love interest of Ted Wiggins.

The back of her house has Truffula trees painted on it but her wish is to see a real one. Audrey is shown to be bright, friendly, and seems to be aware a little bit of Ted's crush on her. She's also very good at school, an example would be when Mr. O'Hare tries to convince the town that trees are bad.

She insistently reminds everyone that trees provide oxygen and reminds them of photosynthesis. She becomes very impressed by Ted's determination to fix things in Thneedville and to bringing back trees. She gives him a small kiss on the cheek.

"What I want more than anything in the whole world is to see a real living tree, growing in my backyard." 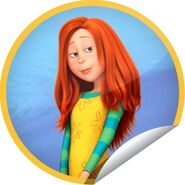