He was a respected captain in the People's Liberation Army who was infected with an alien bacterial infection, but survived due several doctors using an experimental procedure to save him. Gaining superhuman abilities and metal-like skin, Zhifu became China's super-functionary and became a founding member and leader of the Great Ten. On Prime Earth, August General was a member of the Justice League International before being put as a reserve for the Justice League of America. Additionally, he still leads the Great Ten, which has become the Great Twenty when ten more members joined the group.

Fang Zhifu was born in China, and later in his adulthood joined the People's Liberation Army, where he was a respected soldier and rose to the rank of captain. At some point during his time in the military, he was assigned to Xeno Team under the command of Vice Premier Jiang, and would become engaged to an unidentified woman near the Gansu Province.

During his membership with Xeno Team, Captain Zhifu was tasked with capturing a Durlan ship that crash landed in China and killed several other military units. While confronting the aliens, Fang and his team were infected with the aliens with a bacterial infection, but they survived when they injected themselves with counter agents. While it slowed down the process, Zhifu was the only survivor as doctors used a experimental treatment to save him. Though he survived, a side effect was that his body developed metal all over his body, which also caused his engagement to be broken off. Despite losing his teammates and fiancée, Fang was chosen to be China's superhero and was given the name "August Captain in Iron".

Becoming a member of a super-functionary program, August Captain in Iron worked with the Socialist Red Guardsman to deal with the automatons, and was later assigned to hunt down any metahuman in China. Thirteen years after becoming the August Captain, Zhifu became a founding member of the Great Ten, and assumed leadership of the team. In addition, Zhifu received the rank of general, thus his codename changed to "August General in Iron".

On Prime Earth, August General in Iron's past is presumably similar, but he was instead invited to the Justice League International to represent China. The team's first mission was to stop the Signal Men, but they failed, leading to August General to give an inspiring speech on why he supports Booster Gold as their leader. The team later worked together to fight the Signal Men's leader Peraxxus, thus leading the team to be approved by the United Nations. During their debut, the team were attacked by Breakdown and the Burners, and August General's superiors decided to disband the team. August General and the team disobeyed their superiors and managed to defeat Peraxxus, but the group was officially disbanded when OMAC was taken over by Brother-Eye and defeated each member. 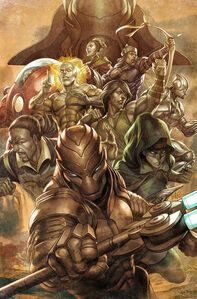 August General with the Great Ten.