Defeat the Swarm
Aid anyone he can

He is voiced by Lester Speight.

After the end of Locust War and Lambent Pandemic, Cole became the president of the Coalition Thrashball League, and started a family by having a daughter named Hanna. In Gears of War 4, Cole returns to aid Marcus, his honorary nephew JD, and his allies in fighting the new threat - The Swarm.

Augustus Cole was born in the town of Hanover by his parents, and his mother had a big impact on his life. At some point, Cole became interested in sports and began playing thrashball, and went on to play it professionally due to his sheer strength and abilities. He became a defensive lineman, Cole signed on with the Eagles and later the Hanover Cougars, becoming an international star and millionaire. After winning a championship and becoming MVP, Hanover gifted Cole by creating a statue in his honor. Due to his fortune, Cole repaid his parents by buying them a mansion, despite his mother not liking to live in Jannermont.

After the Coalition of Ordered Governments defeated the Union of Independent Republics, Cole was relived that the Pendulum War was over, but also regretted not joining to fight against the UIR. Cole later survived Emergence Day, the day the Locust Horde emerge and killed thousands of people in mere hors. Cole later learned that his parents were killed by the Locust, something which haunted him for years.

Wanting to avenge his parents' deaths and to do his part since he didn't fight in the Pendulum War, Cole joined the Coalition of Ordered Governments Army. The next day, Cole informed his teammates, agents and fans that he joined the army, and played his last thrasball game. Due to his popularity, Cole's enlistment caused a huge rise in volunteers for the COG, with local recruitment officials reporting a 390% jump in volunteers. During this, Cole rescued Damon Baird from being beaten by a couple of gears in the bathroom, and the two became best friends. 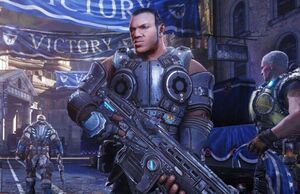 Cole in Gears of War: Judgement. 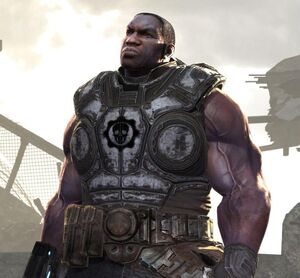 Retrieved from "https://hero.fandom.com/wiki/Augustus_Cole?oldid=1843802"
Community content is available under CC-BY-SA unless otherwise noted.