Destroy the Locust and Lambent threat (succeeded)
Aid anyone he can

Private/Sargeant Augustus Cole or Gus or "The Cole Train" was one of the main protagonists of Gears of War. 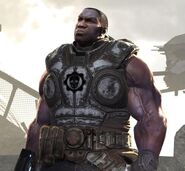 Cole in Gears of War: Judgement.
Add a photo to this gallery
Retrieved from "https://hero.fandom.com/wiki/Augustus_Cole?oldid=1685815"
Community content is available under CC-BY-SA unless otherwise noted.