To raise Hiro and Tadashi
To run the Lucky Cat Cafe

Supporter
Cassidy "Cass" better known as Aunt Cass is the sister of the late Mrs Hamada, the sister-in-law of the late Mr. Hamada and overworked but always supportive aunt and guardian of brothers Hiro and the late Tadashi from Disney's 2014 animated feature Big Hero 6 and a recurring character in its sequel television series Big Hero 6: The Series.

She is voiced by Maya Rudolph, who voiced Rapunzel in Shrek the Third, Burn in Turbo, Matilda in The Angry Birds Movie, Smiler in The Emoji Movie, Connie the hormone monstress in big mouth and Rita in Idiocracy. In the Japanese dub from the movie, she is voiced by Miho Kanno, who also voiced Rami Nana-Hikari in Keio Flying Squadron.

Cass has been caring for Hiro and Tadashi for ten years following their parents' deaths. She is a caring woman who loves her nephews above all else and is very loving towards them, but knows when to be strict. This is shown when she picks them up after they are released from prison. She hugs them and asks if they are okay before lecturing them about how much they worried her. She seems very excitable, talkative, and is usually a very happy woman. She is also understanding and did what she could to help Hiro through his depression after Tadashi's death. She supports and encourages the decisions of Tadashi and Hiro while wanting what is best for them, as she encourages Hiro to go to college as it is what Tadashi would have wanted. She is proud of her nephews and is not afraid to show it. She also appears to be rather oblivious, as Hiro was able to hide Baymax's existence from her (though it is unknown if she was suspicious of Hiro's activities after he set out to form Big Hero 6 to catch Yokai).

By the end of the film, Cass had been introduced to Baymax.

Cass reappears in Big Hero 6: The Series, where she continues to raise Hiro and run her cafe. She is currently unaware of Hiro being involved with Big Hero 6. 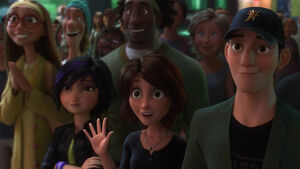 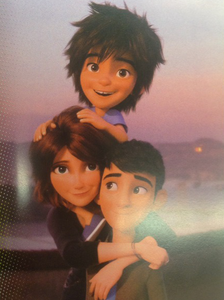 Photo of Cass with young Hiro and Tadashi 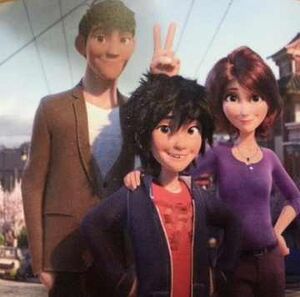