Aunt Pearl is a self-proclaimed Gypsy fortuneteller sturgeonfish and supporting character in the animated film The Reef & its sequel The Reef 2: High Tide. She is the aunt of Pi mother of Dylan. She claims to be reading fortunes but Dylan is embarrassed by her and thinks she's crazy.

She was voiced by Fran Dresher in the first movie and Audrey Wazelewski in the sequel.

She is fist seen using her fortune-telling in a pink pearl to a tell a sponge his future with "being used as a kitchen sink material" . Then she welcomes PI into the reef. She gives Pi fortune-telling, much to his and Dylan's discomfort. Pearl also warns Pi to stay away from Flatbottom (The area outside the reef) She frequently wears a clam with a starfish named Madge on her head. Later, her pink pearl is stolen by Troy's cronies Bart & Eddie. Dylan manages to recover it. In the end, she is seen cheering after Pi defeats Troy and proposes to Cordelia.

"Do your dreams involve sitting on a sink next to a bottle of dishwashing liquid?"

Pearl, Cordelia and Dylan smiling upon seeing the residents of the reef taking a stand against Troy

Pearl thanks Dr. Tang for returning her pink pearl.

Ingr the sequel Aunt Pearl proves to be more useful. She is first seen with Junior telling him how she loves her favorite grandchild to which Junior responds "I'm your only Grandchild!" At the climax, Pearl uses her horrible singing skills to cause one of Troy's cronies to be buried in an avalnchee. She proclaims "I am a star!" Madge responds "That's my line!" She is last seen partying at the end. 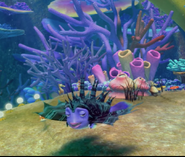 Pearl in a lionfish costume

Aunt Pearl: Pi, what makes you think pathetic fish like us can even defend the reef? Pi: Because...I believe in you.