Auntie Mabel is the main protagonist of the British 1993-1997 TV series Come Outside.

She is played by Lynda Baron, who is best known for portraying Nurse Gladys Emmanuel in the British sitcom Open All Hours and it's sequel series Still Open All Hours.

She would break the fourth wall by talking directly to the viewers at the start and during the episodes.

Mabel lives in a cottage in England with her dog Pippin. In each episode, Mabel would wonder how something is made, how everyday objects and systems work or about how animals live. After deciding to find out why, she would turn to Pippin and say "Pippin, it's time to fly" before the pair would go into their polka-dot plane and fly to the location of that episode's topic. However in the episode "Buses", Mabel and Pippin attempt to use the plane to bring back books borrowed from a library but it will not start, resulting in Mabel and Pippin having to use a bus. In a hurry, Mabel accidentally leaves Pippin on the bus. They are reunited later in the episode where Mabel discovers that the reason the plane would not work was because it's fuel tank was empty. Mabel would also tell the viewers a story relating to that episode's topic and sing a song.

In the episode "Boxes", Mabel and Pippin move to a new house. In the episode, Mabel noticed that Pippin was missing and went into the plane to look for her before flying to the new house and finding her there.

Mabel has three known relatives; her sister Edie Featherstone (whom Mabel talks about often and whose voice is heard in the episode "A Wooly Jumper") and her great-aunt Edna, who is mentioned in the episode "Toothpaste". She also has a nephew named Jay, who appears in the episode "Clay". It's not known if Jay is Edie's son or if he's the son of another sibling of Mabel.

Besides Pippin, Mabel's other pets are her chickens and sheep, that live in her back garden. 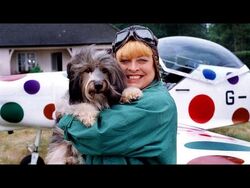 Retrieved from "https://hero.fandom.com/wiki/Auntie_Mabel?oldid=1628048"
Community content is available under CC-BY-SA unless otherwise noted.