This page is about the incarnation of Aurora from the Live-Action film series. The mainstream version can be found here: Aurora (Disney).

Being with Maleficent and her friends

Return to the castle (formerly)

Friend of a Villainess

Princess (later Queen) Aurora (simply known as Aurora) is the deuteragonist of the 2014 live action Disney film Maleficent and its 2019 sequel Maleficent: Mistress of Evil. She is the daughter of King Stefan and Queen Leila, the granddaughter of King Henry and the goddaughter of Maleficent. She is also the wife of Prince Phillip.

She is portrayed by Elle Fanning who also voiced Mei Kusakabe in the Disney dub of My Neighbor Totoro, Winnie Portley-Rind in The Boxtrolls, and Félicie Milliner in Leap/Ballerina.

As an infant, she was cursed by Ingrith that before the sun sets on her sixteenth birthday she would prick her finger on the spindle of a Spinning Wheel and fall into a sleep like death. Maleficent did this as revenge against Aurora's father King Stefan, who was Maleficent's childhood friend and had betrayed their friendship by cutting off Maleficent's wings in order to become King.

To keep Aurora safe, she was taken into hiding. Over the next sixteen years, she comes across Ingrith many times as she grows up and comes to believe the wicked queen is her mother in law. She runs to maleficent and Diaval for protection from ingrith. She is secretly cared for by Maleficent and Diaval since the Pixies are incapable. Even as a toddler she has no fear of being near Maleficent, especially when she hugs her and lets her pick her up.

When Aurora turns fifteen, Maleficent takes her to the moors and two eventually become good friends but remains unaware that the fairy she claims to be her Fairy Godmother is the one who cursed her as an infant. She wishes to stay in the Moors with Maleficent but after learning the truth of her past and Maleficent's identity, she returns to her father. Unfortunately she was not supposed to return until after her sixteenth birthday and as the sun begins to set the curse calls to her and follows a whispering voice to the dungeons where all the spinning wheels in the kingdom were burnt. She approaches one spinning wheel that repairs itself and slowly reaches out for the spindle. She pricks her finger and falls into her death like slumber.

Maleficent brings Phillip to her, the prince she met in the forest, hoping his kiss would break the spell on her but unfortunately it doesn't. So sad and ashamed of what her hatred has brought upon her friend, She gives her a goodbye kiss on the forehead and just before she can walk away a miracle happens, Aurora wakes up happy to see her Fairy Godmother. Their friendship was the strongest true love that can ever be.

As they try to sneak back to the Moors, Maleficent gets captured Stefan's guards, Aurora tries to save her but she is overpowered and told to run. She finds her way to a small room where she finds Maleficent's wings and they're still alive. She manages to free them and reemerge with Maleficent giving back her ability to fly.

In the last scene, Aurora is crowned queen of both the human and fairy kingdoms and is reunited with Prince Phillip who both smile at each other. The narrator of the film concludes the tale by revealing that she is in fact an elderly Aurora retelling the story.

Five years later, Aurora has reigned as Queen of the Moors and eventually accepts Phillip’s proposal, when the prince gets the courage to get down on one knee and asked for her hand in marriage. Maleficent, her godmother advises her against the union, though Aurora insists she will be proven wrong. At the dinner she attends with her future in-laws, King John suddenly falls into a deep slumber seemingly cast by Maleficent. Aurora doesn’t believe Maleficent when she proclaims that she did not curse him. Aurora eventually grows disillusioned with being an Ulstead noblewoman but is happy that the Moor denizens are invited to the royal wedding. Aurora discovers that Queen Ingrith hates all Moor fairy folk, bitterly resenting their prosperity during a time when her kingdom had suffered. Aurora also learns that it was Queen Ingrith who cursed King John, using Maleficent's old cursed spindle.

When Maleficent eventually shows up to fight Queen Ingrith and her army, Aurora pleads with her godmother to not kill Ingrith. She appeals to Maleficent's humanity to spare her and declares that only Maleficent is her mother. With Maleficent distracted, however, the Queen fires her crossbow. Maleficent sees this, and saves Aurora, but is struck by the arrow instead. She then dissolves into ashes. As Aurora's tears fall on the ashes, Maleficent is reborn as a Phoenix. Terrified, Queen Ingrith throws Aurora off the tower, prompting Maleficent to save her.

When Prince Phillip manages to forge peace between the fairies and humans, the Ulstead soldiers stand down. Maleficent reverts to her fairy form and gives Aurora and Phillip her blessing. After Aurora and Phillip are wed, Maleficent returns to the Moors with the other Dark Feys. She promises to return when there is a christening. 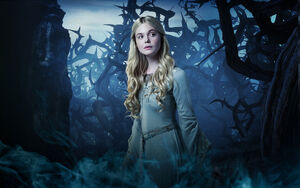 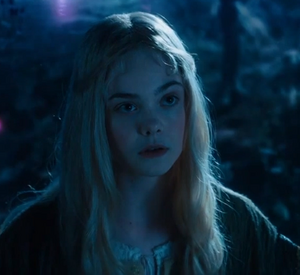 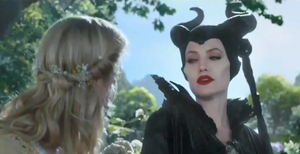 Aurora as a baby, smiling at Maleficent.

Aurora as a toddler. 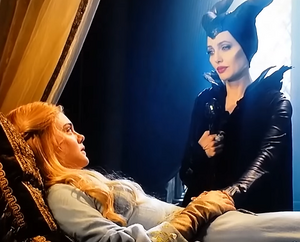 Aurora is awakened from her sleep by Maleficent's love.

Aurora as the new queen, along with Maleficent and Diaval. 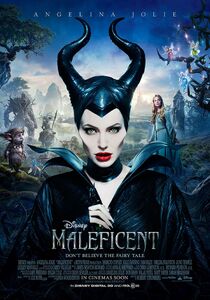 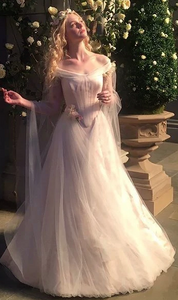