Supporting Robot
Auto, also referred to in Japan as Rightot, is a character from the original Mega Man series who was first introduced in Mega Man 7. The timeline implied that it has been living with Dr. Thomas Light, the only scientist who created him, for a while. In addition, it is seen to have a half-track called Rightot'n Half-track, created by him, and is the helpful mechanic for the assistance of Dr. Light. It is often seen with its pet Eddie. As an inventor, Auto creates important items for Mega Man by using screws or bolts as credits, which are very similar to money like in the entries of the classic series from Mega Man 7 to the latest.

In the opening stage of the game as Auto's first appearance, it drives its half-track with Mega Man and Roll riding on it. However, Auto cannot continue the obstacle of the damaged road, caused by Dr. Wily and his army of evil robots, and tells Mega Man to proceed on foot as the only way of dealing with it. Even Dr. Light investigates the damaged city, where Dr. Wily escaped from a prison cell in his quest for world domination.

As a shopkeeper, Auto owns the Big Eddie, a mobile laboratory where it trades screws as in-game's currency to sell anything to Mega Man. The difference of the Japanese version is that it randomly appears in place of either Dr. Light or Mega Man's robotic sister Roll in Dr. Light's home laboratory, where Mega Man obtains a Special Weapon from a beaten Robot Master, making comical comments about hopping that screws aren't combined with the Junk Shield, the comparison between the Slash Claw and Strider Hiryu's slash attack, and other discussions. In the actual ending of the game, Auto also makes its appearance in the Big Eddie along with Mega Man Roll, Rush, Eddie, Beat and Dr. Light before the picture is taken by the camera.

Auto appears to assist both Mega Man and Rush with a bazooka-like cannon, which is actually used to attack enemies, in Rush Jet areas of Tengu Man's stage, located in Japan, and the second stage of Dr. Wily's stronghold. In the game's ending cutscene, Auto is also present again alongside Eddie, Roll, Dr. Light and Mega Man inside Dr. Light's laboratory.

Like in Mega Man 7, Auto appears and reprises its role as a shopkeeper and once again opens a store, where it invents parts for the player and trades screws.

Auto reprises its role of running an item shop, helping Roll and exchanging screws as this game's main currency with each item just like in the previous entries of the series. It is known for restoring the jet upgrade of Mega Man's robotic pet dog Rush after beating five robot masters too.

There are known differences depending on the playable character you are using in the game. While playing as Mega Man, Auto helps its creator Dr. Light rather than Roll, who is infected by the Roboenza virus, and runs its own item shop without wearing the Metall helmet like the previous installments of the series from Mega Man 7 to this. If the player chose Proto Man, Auto opens an alternative item shop by itself, and has the Metall helmet under its unidentified display (?????). Also, inside the shop, Tango appears to be either napping or playing on the counter.

Auto, along with Roll and Dr. Light, runs the item shop, much like the previous games. In the beginning, it is present as the Robot Masters have their annual maintenance check-up. It also witnesses them being captured by Dr. Wily and bids good luck to Mega Man before it leaves to stop the reprogrammed robots. About halfway through the game, it and Roll eavesdrop on Dr. Light's conservation with Mega Man about Dr. Wily, his making of the double gear system and his subsequent fallout with his former friend and colleague.

Auto is present in the actual ending of Mega Man. Also, Proto Man appears when cooperatively playing as both him and Mega Man in the arcade follow-up.

Auto made a minor cameo appearance in intro scene of Volt Catfish's stage. This feature is exclusive to CD versions of this installment of Mega Man X series only.

Auto became one of the playable characters in this PC-exclusive strategy game.

Auto uses its vehicle to win the race against Eddie in the game's loading screens. Besides, it appears again in Mega Man's ending scene.

The player's game menu features Auto, who gives certain information about both weapons and items.

In Super Smash Bros. Ultimate, Auto appears as a advanced support spirit that equips the player a super scope that can be obtained in World of Light on a treasure chest on the power plant, It spirit battle is on the omega form of the Moray Tower stage against R.O.B. who starts with a super scope. 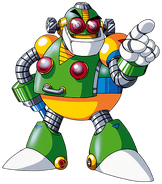