Aversa is a false antagonist from the Fire Emblem video game series. She is Validar former protegee until Robin freed her from his brainwashing and now it's helping him in his/her quest.

Aversa has white hair and a revealing outfit who partial show her cleaveage, she also carries a book with her.

In the past, Aversa was a simple plain girl before being captured by Validar and been brainwashed by him to serve Grima's religion, the Grimleal. As such, Aversa serves as a slave of the villains for most of the game.

After her apparent death, Aversa appears again in the wellspring of Truth where Robin saves Aversa from her being brainwashing, Robin will later help Robin and Lucina to get revenge for her enslavement by helping her to defeat Grima.

During the events of this game, Aversa has became more mellowed and more approchable, growing feelings for the summoner Kiran.

Aversa is a quite kind and empathetic woman, after the brainwashing was destroyed. Although she is extremely loyal to her superiors who was inmensely remourseful over her past deeds and wish to atone them, joining with Robin, she will fell in love with the male Robin. If player chooses to, Robin, can reciprocate her feelings and start a family with her.

If Robin is female, Aversa falls in love with Chrom instead, however Chrom never reciprocates her affection. 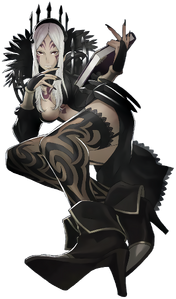 Artwork of Aversa from Fire Emblem Heroes by PenekoR.

Artwork of Aversa in Fire Emblem 0 (Cipher) by Aoji. 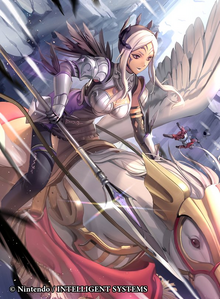 Artwork of Aversa in Fire Emblem 0 (Cipher) by Aoji.
Add a photo to this gallery

Retrieved from "https://hero.fandom.com/wiki/Aversa?oldid=1939809"
Community content is available under CC-BY-SA unless otherwise noted.