He was a Human senior non-commissioned officer who served with the UNSC Marine Corps during the Insurrection and Human-Covenant war, and was known for his gung-ho and eccentric personality, but was a well respected leader and soldier in the military. Avery Johnson was a highly trained Marine, serving with various units of the Naval Special Warfare Command, including the highly classified ORION Project. During his tenure during the war, Johnson became an ally to Master Chief, and was pivotal in forming the alliance between humanity and the Sangheili.

He was voiced by David Scully (who also voiced Dimitri Lousteau in the Sly Cooper series), and by Corey Krueger in Halo Wars 2.

Johnson played a vital role during the course of the Great War and fought at major battles such as Harvest, Reach, Earth, and the events at Installation 04, 05, and at the Ark. He was key in forming an alliance between the Humans and Sangheili following the Great Schism and the outbreak of the Flood in November 2552. Ultimately, Johnson was killed in an attempt to prematurely activate a replacement Halo by 343 Guilty Spark. He was honored by Fleet Admiral Sir Terrence Hood twice, first with the Colonial Cross just prior to the invasion of Earth; then just months later, alongside his fallen comrades, at the Hillside Memorial in Voi, Kenya.

He was best known for his typical "gung-ho" attitude towards life, personal goals, and as a leader to his fellow Marines. This earned him a reputation, respect, and admiration from his subordinates and superiors alike. However, his eccentric behavior took a liking to "flip music", a style of music similar to the heavy metal from the 21st century. Avery Johnson is also noted as being one of a select few outside of the SPARTAN-II Program to befriend Master Chief Petty Officer John-117, whom he fought alongside multiple times throughout the final months of the Human-Covenant War; ultimately dying in his arms after being critically injured.

Avery Junior Johnson was boron on Earth in Chicago, Illinois of the United States in the twenty-fifth century, being the son of unnamed parents. His parents would leave their son when he was six years old, leading Avery to be raised by his aunt Marcille, where he would have fond memories of attending church with her. Due to his religious upbringing, Johnson would often question the morals of killing other human beings during war.

When he was nineteen years old, Avery decided to join the United Nations Space Command Marine Corps to participate in the Insurrection, a civil war where the United Rebel Front wanted liberation from the Earth government. After receiving his training, Johnson was assigned on numerous classified missions and black operations, such as Operation Tanglewood and Operation Kaleidoscope. He was later handpicked to be a subject of the Orion Project (later dubbed as the "SPARTAN-I" Program) made by the Office of Naval Intelligence to augment soldiers to turn the tide of the civil war. During his time, Johnson received training in orbital drops, close-quarter combat, and became a student of the Naval Special Warfare Sniper School, where he impressed his superiors with his accuracy.

Johnson continued to be assigned on numerous operations, including Operation Trebuchet, where he led Alpha Squad to deal with civilian uprisings and destroy bomb factories. During the operation, Johnson was ordered by Nolan Byrne to eliminate a rebel that had a child hostage, but Avery hesitated, causing the death of Byrne's squad and countless civilians. He would feel great guilt from the incident, and also gained the resentment of Byrne due to his hesitation. After the operation, Avery returned home and learned that his aunt passed away, leading him to turn to alcohol. He was later found in the gutter after starting a brawl at the Chicago club, and was sent to the planet Harvest to train the Colonial Militia. However, Johnson and the militia were actually on a secret mission to form a covert anti-insurgency unit to lay ambushes.

While on Harvest, Johnson would lead the First Platoon with Byrne and Jilan al-Cygni in repelling the Jiralhanae, and fighting chieftains Maccabeus and Tartarus. During this time, Avery and Jilan became romantically interested in each other, but it's unknown if the two truly developed a relationship. Afterward, Avery participated in Operation Silent Storm, where he first encounter the SPARTAN II, the successors of the Orion project. Avery met John-117, and was pivotal in reducing the friction between the marines and the ODST's during the operation. 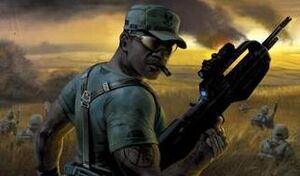 Johnson, as seen on the cover of the novel Halo: Contact Harvest.