Second-in-comand of the Lord Commander

Bounty hunter (both formerly)
Member of the Team Squad (curently)

Avocato is a main character of the Sci-Fi animated series Final Space. He is a Ventrexian (an alien cat) who was a bounty hunter to retrieve Specimen E-351 for Lord Commander, then later he takes Gary's side to fight against Lord Commander and rescue his only son Little Cato held in prison. He is also the best friend of Gary Goodspeed.

He is voiced by Coty Galloway.

Avocato is a rather serious bounty hunter who can seem cold and stoic at times. He does have a warm side, however, which appears especially when he is around his son and occasionally between him and Gary.

Avocato can also be shown as cruel which can be seen in the series when he watches fellow bounty hunter, Terk, die by getting painfully tazed with a casual, and almost annoyed, look. However, he’s also very brave, kind, helpful, and very wise.

Avocato also has a very dark past, he used to be the Lord Commander's right-hand who killed billions of people on a planet and killed the King and Queen of Ventrexia under his order, however, he grew to have a more emphatetic side towards his adopted child Little Cato, as he would be more worried about his health and savety than his own.

Avocato's appearance is that of a Ventrexian, an anthropomorphic feline. He has dark teal fur with white facial markings and a triangular pink nose. He has large yellow eyes and small black pupils. He wears boots, a grey belt with a silver buckle, greenish leggings, a tan vest, a pair of shoulder and knee pads, a brown utility sash, and arm bracers.

Avocato was introduced as an antagonist in Chapter 1. He and the other bounty hunters invade the prison ship and fight with the robots, and some bounty hunters were sucked out into space, and Avocato is armed and playing cards with Gary and KVN. Avocato tells Gary that Mooncake is a Planet Killer, but he doesn't believe him. Avocato warns Gary that Lord Commander will find him wherever he hides.

In Chapter 2, Avocato and Gary get out of the ship and go to Tera Con Prime to find an evil bounty hunter named Terk. They go to Clarence to have Gary disguise himself as an alien named Melanie Dewinger. After Gary got lost, Avocato confronts Terk, who tells Avocato that his son is held imprisoned in cell 43, and Avocato electrocutes Terk. Then Avocato sees his son Little Cato in his cell. Little Cato tells Avocato that he is in a trap, and the Guards take Avocato to Lord Commander and Gary goes on rescuing him. Lord Commander lectures Avocato for failure to capture Specimen E-351, and Avocato tells Lord Commander information about a man named Gary who has Specimen E-351, tries to deal with Lord Commander that he can have Gary so that Avocato can have his son back, but Lord Commander refuses. Then Gary arrives and Lord Commander telekinetically tortures Gary and Avocato can't leave him to suffer. Avocato tries to break Gary free, but Gary's arm is dismembered by Lord Commander, and Avocato and Gary escape with Lord Commander's minions pursuing them. Avocato does not want to leave his son behind, but continues escaping. Gary's arm is then lost, and back on the prison ship, Avocato helps replace Gary's arm with a robotic arm. The episode ends with Avocato's son Little Cato being taken away to a place where his father will never find him.

In Chapter 3, Avocato and Gary go to Planet Yarno to hide Mooncake by taking him to Stevil, but Stevil imprisons Mooncake and puts Gary and Avocato in a labyrinth trap, and they end up being attacked by mutant cookies. When Gary sees a fake Quinn, and Gary approaches and Avocato tries to stop him but Gary shoves him out of his way, Avocato tells him that it is a trap, but Avocato sees the fake Little Cato, then Avocato punches Gary to break free from the trap and wakes up. Avocato and Gary go to save Mooncake, and Avocato shows Gary on the TV that Mooncake is in a fight with monsters, and Gary and Avocado finally find Mooncake. Back at the ship, HUE can not find a match for Little Cato.

In Chapter 4, Avocato fights off the prison ship's security robots with Quinn and KVN when HUE gets hacked by the Infinity Guard and sends them to attack them. The three of them have an argument about who should go and install the override chip needed to return HUE to normal.

In Chapter 6, Gary and Avocato go to Lord Commander's prison colony to rescue Little Cato. On the way, Avocato reveals to Gary that he used to be Lord Commander's second in command, but rebelled against him when he ordered all his lieutenants including Avocato to kill their firstborn children to prove their loyalty. However, Lord Commander forced Avocato to keep working for him by imprisoning Little Cato and threatening to kill him if he defied him again. The reason he joined Gary in the fight against Lord Commander was to atone for the things he did while under his command. When they find Little Cato, they find out that he has been brainwashed by Lord Commander, who orders him to kill Avocato. Avocato is able to free him from Lord Commander's control, and the four escape the prison colony with the help of Quinn, KVN and Mooncake. Unfortunately, Lord Commander uses his telepathic ability to attach a bomb to Little Cato's back. On the ship, Avocato notices the bomb, grabs it, and runs to the other end of the ship, therefore sacrificing himself for his son. 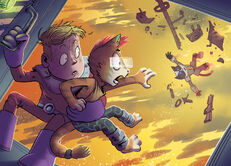 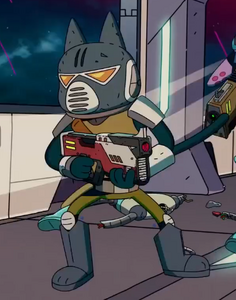 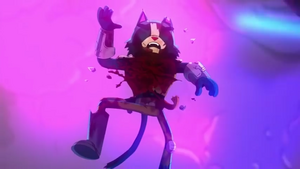 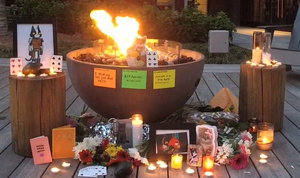 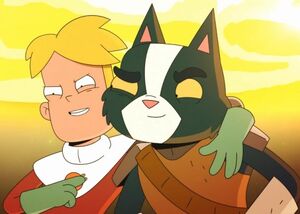 A photo of Avocato with his son, Little Cato. 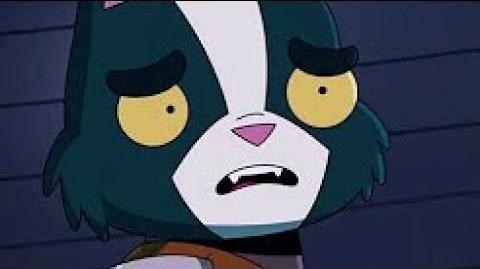