Redeemed Villainess / Misguided Hero / Anti-Villainess
Awaki Musujime (結標淡希Musujime Awaki) is a recurring character from the Toaru Majutsu no Index series. She's first introduced as an antagonist and a rival against Kuroko Shirai, but is eventually redeemed after being taken into custody. She's eventually found and conscripted into GROUP and fought against her superiors to acquire free will which both her and the rest of her partners acquired at the end of World War III.

Awaki is an average teenage girl with dark red hair and two low ponytails. She wears the Kirigaoka Girls' Academy jacket over her shoulders as if it were a cape and she usually wears a skirt and a pink croptop. She's also seen wearing bandages over her breasts sometimes as well. Awaki is also seen carrying around a military flashlight which she uses to guide objects that she teleports at her target.

Awaki is very sufficiant in her missions when in comes to her activities that she conducts in the darkside of Academy City. She often takes down her opponents well and often times likes to see them suffer like in the case of Kuroko during their first encounter. She's willing to take down any opponent she faces but won't take their lives if necessary. Awaki acts all cold and ruthless during her debut but after she ends up moving in with Komoe Tsukuyomi, she ends up redeeming herself and develops a much more kinder side to her personality.

Awaki views Komoe as a mother-like figure as she raises her and cares for her even though Komoe herself is caring for Awaki, an agent for Academy City's dark side and a de-facto criminal. Awaki is also shown to be rather merciful demonstrated how she'll avoid killing if she can and also spared a mercenary attacker during a raid on the Reformatory complex. Awaki is refered to as a "shotacon" by the other members fo GROUP stemming from how she's the only one in the organization that takes her job seriously while the others don't. It's also implied that she acts uncouthly when guys aren't around and is described as "someone that seems to think that it is not a problem to be seen completely naked if it  is among girls". Awaki is at first afraid of her ability to teleport based off of an incident back in her past but she was able to overcome it by October 9. 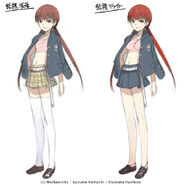 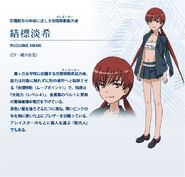 Add a photo to this gallery
Retrieved from "https://hero.fandom.com/wiki/Awaki_Musujime?oldid=1698611"
Community content is available under CC-BY-SA unless otherwise noted.