A few years before the events of the game, Ax Battler was calmly returning home after a good hunt, thinking how happy his mother will be. After his father died when he was young, it was very important for him to make his mother happy. When he arrives at the entrance of the village, he finds no sign of life, only a heap of corpses. Unsettled with the sight, he rushes home to see if his mother is safe, but finds her lying in a pool of blood. He mourns her death and swears to avenge her. The barbarian later discovers that Death Adder's forces were responsible for the destruction of his hometown.

Ax Battler is one of the three heroes to stand up against Death Adder and his forces. Ax Battler, along with Tyris Flare and Gilius Thunderhead, pushed back the forces of Death Adder, retrieved the Golden Axe, and renewed peace across Yuria.

Ax Battler, along with Tyris and Gilius, join forces to fight against Dark Guld and his minions to retrieve the Golden Axe and restore peace across Yuria once more.

Ax Battler is the most balanced of the three warriors, having great strength (although not as strong as Gilius) and magical power (which Tyris is better at). He uses a long sword as weapon. 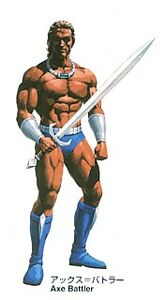 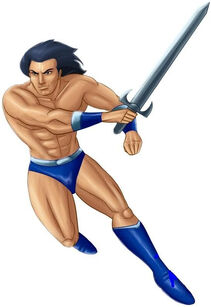 Retrieved from "https://hero.fandom.com/wiki/Ax_Battler?oldid=2116580"
Community content is available under CC-BY-SA unless otherwise noted.