To aid Organization XIII with their goals and gain a heart (originally; failed)

Figure out those who are planning to overthrow Organization XIII and eliminate them (Chain of Memories; failed)
To protect his friends (358/2 Days; failed)
To bring Roxas back by any means necessary (Kingdom Hearts II; failed)

Axel, the Flurry of Dancing Flames (おどる火の風 Odoru Hi no Kaze), is the Nobody of Lea, and is Rank VIII within Organization XIII. He wields fire and enhances his weapons, twin Chakrams, with his pyrokinesis to unleash powerful rapid attacks. The Assassin Nobodies are under his control. He is voiced by Quinton Flynn.

Using this to his advantage, Axel allowed Naminé to escape and contact Sora. No sooner did Naminé, Axel pondered the chaos to ensure before realizing that he was laughing, to his amazement. He later confronted Marluxia, allowing him to figure out that he acted as a double agent during their entire time in Castle Oblivion. Citing his previous order to rid the Organization of traitors, Axel readied to attack Marluxia, even after Marluxia used Naminé as a shield, but was interrupted by Sora, whom he eventually fought for the last time.

At the end of the battle, Axel pretends to be defeated and confuses Sora with the words "It was worth saving you after all," and vanishes. The exact reason for Axel's betrayal is not stated, and seems self-contradictory. Axel comments that it would be more interesting to see Sora and Riku's future than to save Zexion; however, this may have had something to do with Axel's friendship with Roxas, which could have been the reason why he effortlessly destroyed Vexen—to prevent either Sora or Roxas from meeting. In Kingdom Hearts Re:Chain of Memories, Axel states the reason for his betrayal of Zexion, saying: "You just found out way too much."

This seems to be quite ambiguous, as in Kingdom Hearts Re:Chain of Memories, Axel and Zexion were shown to be friendly with each other (e.g. in one scene it was shown that Zexion and Axel were making bets on which Organization members in the Castle would be the next to die, something that Axel wins when he accurately predicts that Marluxia will be the next to fall), however this could mean Zexion found out about Saïx and Axel's plan to take over the Organization, which is supported in the Secret Report made by Zexion in which he stated he had growing suspicions about Axel and Saïx. Axel hints that the Keyblade caused the hearts that composed the Heartless to flee, but refuses to say what Organization XIII would do with those hearts. Sora realizes that Axel is Kairi's captor, and Axel confirms this.

Though initially seeming unrepentant for his actions, he soon apologizes for kidnapping Kairi. However, he soon vanishes into a dark corridor just as Saïx appears. He is first introduced at the beginning of Kingdom Hearts Chain of Memories. Axel has a mysterious, stoic, and calm demeanor on par with that of Marluxia. A very good liar, he makes a point of keeping himself difficult to read, coming off as fooling around when really his mind is at work manipulating the other members around him.

Axel often makes witty conversation with Larxene while Marluxia is away, though is almost completely unfazed by her flirtatious behavior towards him. He also has friendly bets with Zexion as to which member will be defeated next, seeming amused at their deaths. He was a good hero and cares for Roxas and Sora. 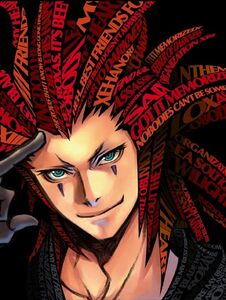