Copy one Another Reploids
Stealth Ability

Axl (アクセル Akuseru) is a playable character and the tritagonist from the Mega Man X series, making his debut in the seventh game. He is a prototype for a next-generation reploid which enables him to mimic the external and internal characteristics of anyone he encounters. Axl has held important roles in two of the games he has appeared in so far, effectively making him the third playable protagonist of the Mega Man X series alongside X and Zero, as well as the tritagonist.

It is voiced by Lenne Hardt in English and Minami Takayama in Japanese.

Axl is the new Maverick Hunter, who used to be a former member of Red Alert. However, this hasn't really changed his outlook on life. As the prototype of the next-generation of Reploid evolution, Axl's copy ability allows him to effectively become anyone.

Axl was introduced in Mega Man X7, having just left the mercenary Red Alert Syndicate and seeking asylum and membership in the Maverick Hunters. The Red Alert Syndicate, which hunts Mavericks and also takes on less savory assassination jobs, has been infiltrated by Sigma, and confronts the Maverick Hunters. X, Zero, and Axl work together to defeat Red Alert, but in so doing, destroy both Red, the leader of Red Alert, and Sigma, the only ones Axl knows of who know about his origins.

Axl appears in Super Smash Bros. Ultimate as a advanced support spirit that equip the fighter a ray gun at the start of a battle. Its spirit battle is a stamina battle on the omega form of the Midgar stage against two Mega Man who starts with ray guns and increased the shooting item powers. 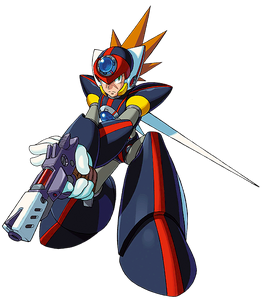 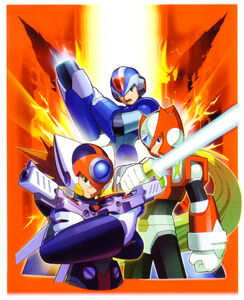 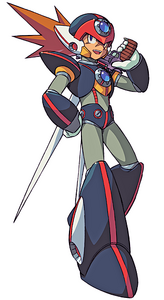