Daughter of the chairwoman

Going to school with Honoka, Taking pictures of Honoka

Protect Honoka and be with him forever

Ayaka Kagari is the female protagonist of Witch Craft Works. She is the School Chairman's daughter, as well as the most popular student in school and a strong Fire Witch who has the ability to manipulate fire, she often goes ballistic when on the attack. Her legions of fans refer to her as "Princess," she belongs to a group of witches who were called the "Workshop Witches" which is a group of witches who establishes workshop or studios in every major cities to monitor and keep in check other witches who might use their powers for evil purposes. She is taller than Takamiya and she takes her mission of protecting him very seriously that she will not hesitate to go to any extent to keep him safe. She is also capable of fighting without the use of magic.

Ayaka has green eyes and long black hair. Her most obvious traits are her large bust and her great height, towering over nearly everyone in the series, save for her mother. She paints a very serene figure, her expression rarely changing except for the occasional glare when she's angered. Another trait is a large scar on her abdomen. Briefly seen before in the series, Ayaka didn't elaborate on it until chapter 33, though even she doesn't know how she got it.

Ayaka is the Princess of Tougetsu Academy, a title given to who is considered the best student in the school. The Princess is an extremely powerful Fire Witch and her power is only second to her mother and chairwoman of the school Kazane. As the princess, she has her own fan club and personal defense team comprised of her fans.

She is extremely stoic, her expression almost never changing and she's never been shown smiling. Typically she doesn't even react to people or talk, ignoring even her fan club who is around her daily. In middle school she was downright inept at social interaction, not even realizing she had to hit the ball back when playing tennis until she was told. According to Honoka it is very difficult to distinguish when Ayaka is serious or joking.

When Honoka is involved Ayaka's demeanor changes greatly, having an almost single-minded focus on him and shows a lethal temper that even a small slight can set off. She is extremely protective of Honoka, even him getting a small scrape on his elbow during training causing her to panic. Ayaka regards anyone who tries to harm him (whether be it a Tower Witch or just a school bully) as an enemy who must be eliminated. Because of this, she often becomes angry or annoyed when Honoka is antagonized and will not tolerate those who would try to pull them apart. Whether it be her magic powers or using her authority as the Princess, Ayaka does everything in her power to be with Honoka.

Ayaka's childhood has not been expanded upon except in several cryptic flashbacks and dreams. She is certain she and Honoka knew each other, but can't remember that time, hypothesizing that their memories were erased. It is also hinted that she already invincible since she was small.

In middle school Ayaka Kagari was a very apathetic and helpless girl. She didn't know how to interact in society until Touko Hio and Kanane Hozuki were appointed as her caretakers. In fact, Kanane even asked if it was the first time Ayaka had ever attended school. She had to be constantly helped by Toko and Kanane. Although she was socially inept, she was exceptional at anything she put her mind to. With her skill and beauty she became an idol in the middle school itself, though she spent most of her time in the library.

At one time some seniors tried to bully her, but she retaliated by raising their body temperature and said to them "there is only one person [she] will allow to touch [her] and he is not among you." After that she constantly went to search for that person. She improved her search by various methods and after nearly a year she found Honoka Takamiya and his sister going home one day, finally discovering who she had been searching for.

She asked her mother Kazane Kagari to take a more prominent position in Tougetsu Academy in order to place Honoka and her in the same class room so that she could protect him and did so in secret until the series began.

Ayaka is very protective of Honoka and wishes for him to lead a peaceful life. She will attack anyone who threatens him and dislikes being separated from him, going so far as to fire the Student Council President for trying to interfere with their relationship. Her protective instinct is so strong she'll even make a contract with Medusa or stand against her mother. Due to her attachment to Honoka she's always around him at school (often making him lunch), in town, and even sleeps in his bed without his knowledge. She also helps tutor him in school and is his magic instructor, the former done because she wants to go to the same university as Honoka.

She likes to tease Honoka sometimes due to her romantic feelings towards him, though her demeanor makes it difficult to discern if she is joking or not.  She also likes to take pictures of him in his magical outfit. Later it is revealed that Kazane and Komachi decided to arrange a marriage between Honoka and Ayaka, making Ayaka Honoka's official fiance.

Ayaka claims to have met Honoka before, though unfortunately she can't actually remember when, claiming their memories together were erased. However doing so didn't eliminate her obsession over finding him. In middle school she searched over seventy different schools for months until she saw Honoka in a crowd, instinctively knowing she'd found what she'd been looking for. Afterwards Ayaka demanded from her mother that she arrange for her and Honoka to attend the same school and be in the same class.

Ayaka is a fire witch. She can manipulate and create fire with just a thought, even being able to transform into flames, whilst her body itself is made of flames. Her power increases even more so if she taps into Honoka's power. She can also use broom for flying as normal witches do. This ability make her a being known as a "Ignition Magician".

Physical Abilities: As a student she is very intelligent and has top grades. She is also in peak physical condition, having no trouble doing strenuous physical activity for extended periods of time. Due to training from her mother she is capable of defeating a Tower Witch even when unarmed. She is very strong (possibly one of the strongest witches in the workshop), able to take down enemies 20 to 50 times her size (due to the training her mother gave to her since childhood, fighting giant wild beasts), lifting two Tower Witches and throwing them both to the ceiling without effort (despite the 2 Tower Witches being in Witch-Mode, which makes them light in weight, breaking through the ceiling is a different situation), falling from great heights (possibly 400 feet) of the air and landed on solid floor and stands up without a scratch, and quickly wakes up from 3 big game tranquilizers, to which Kasumi Takamiya stated that would keep her down for 3 days, even if she isn't in witch mode, she is seen carrying Honoka Takamiya with no signs of difficulties at all. In the manga, with no effort at all, she simply punches a volleyball right through the net and directly to Rinon's face, knocking her out unconcious during a game of volleyball. There are also some moments wherein Ayaka actually breaks through a wall once. Unknown to the level comparing to her mother or Evermillion, when it comes to physical strength, Ayaka is probably one of the strongest witches in the series.

Overdrive: On several occasions, Ayaka has displayed a sort of boosted form in which her hair becomes a bright white and her body is enveloped in flames. From a perceivable level, this appears to increase her pyrokinetic skills exponentially and allow her to ascend without the use of a broom. In this mode, she also could summon a dragon (presumably her familiar). 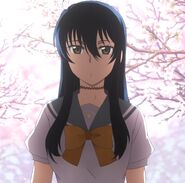 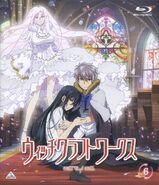 Retrieved from "https://hero.fandom.com/wiki/Ayaka_Kagari?oldid=1697650"
Community content is available under CC-BY-SA unless otherwise noted.