Cousin of Takahiro. During the day it serves as a Winford health physician, is over the night from evening to work as a shopkeeper of TARTE TIME, but the person in question has been happily Kakemochi busy is to not think Akane. It usually gently, although endeared from the school of the people in the neighborhood also from students, also known as a very scary person and the cell once occurs. Sometimes riding in consultation Takahiro, there also be the advice. It is loved as a brother Takahiro from an early age, because of the position, such as the currently guardian, Takahiro does not increase the head. Feat volleyball Sarah Shine. My hobbies are eating applicants and pudding Sweepstakes. Favorite color is black. Favorite music is like the bassist in the UK-ROCK. Type of favorite men, to let me crazy, people who chase their own dreams of the very hard. Those important words that TARTE TIME · your grandfather gave me. Muscular physique is complex. I hate the sound of scratching the glass. Future dream is to repay the money of TARTE TIME, to the pudding party thing. The person to be respected Jeanne d'Arc. In Ayako root in the "More & More" and we hope that Takahiro returns to the knight, and decided that he returns to the knight as a trigger of their own advice. In the wake of that first year of Erie has confessed in TARTE TIME hugging romance to Takahiro, of him will not stick a hand in the work in the mood. It was also the moment when the love of rivalry over the Takahiro of the Erie began to grow. In fact, is a school of graduate, it has been found to be a former knight from the fact that during Son-gaku had belonged to Knight family. 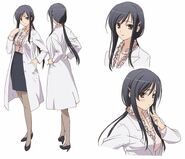