Student at Seiryo Academy, Future head of the Kannagi family

Eating cake, Hanging out with Yukari and Nanase, Going on missions with Kazuma

Ayano Kannagi is the main female protagonist of the light novel and anime series Kaze no Stigma, and, for a time, the sole main protagonist. She is the future head of the Kannagi family, the inheritor of Enraiha and the daughter of the current head Juugo Kannagi. She is also the second cousin of Kazuma Yagami and Ren Kannagi, as well as the love interest of the former.

She is voiced by Ayumi Fujimura in the Japanese version of the anime and Cherami Leigh in the English version, both of whom also voice Cecily Campbell.

Ayano is a young girl of average height with long red hair in a hime cut and red eyes. She is normally always seen wearing her school uniform, though she is seen changing her outfit on occasion.

Ayano takes her role as the next head of the Kannagi family very seriously. She's brash, short-tempered, impetuous and easily as arrogant as her cousin. She rarely thinks things through, preferring to charge in blindly to situations. Her pride for her family and heritage is often the fuel for her recklessness, as she believes her family name and force alone would allow her to beat anyone. This never ceases to annoy her father, who has to constantly remind her that not all problems can be solved with brute force.

In contrast to what would be expected from a woman of a prestigious Japanese family, Ayano is far from elegant and very rebellious, being more than willing to disobey her father's orders if they collide with her own personal sense of justice. This can be to her detriment, as she'll often go and do what she believes to be right without learning the entire picture beforehand, and is very prone to jumping to conclusions. Ayano is also shown to be very naive, especially when it comes to anything involving her family; whenever a problem arises for the family, Ayano is usually unable to see that it was the very policies of the Kannagi family that caused the problem in the first place, believing that there is nothing wrong with the way the Kannagis do things. She is also very stubborn and has a one-track mind, sometimes refusing to admit when she's wrong even when all the evidence points against her. All in all, Ayano is not particularly bright, and her friends Yukari and Nanase claim being spaced out from reality is normal for her.

Initially, Ayano hates Kazuma, taking a great disliking to his bitter, selfish attitude and willingness to charge her father for saving his own kid brother. However, she later starts to develop a crush on him, though she gets annoyed whenever someone points it out (this "someone" usually being Yukari or Nanase) and flies into a jealous rage whenever she sees him with another woman, making her a textbook example of a tsundere. She later comes to realize that she is actually in love with him. Ayano also has something of a sweet tooth, spending a lot of time at cake shops after school and gorging herself on cakes and sweets, especially if she's in a bad mood.

Despite her undisciplined attitude and short temper, Ayano is a kind person who cares a great deal for those close to her; she is very affectionate towards her youngest cousin, Ren, and while she sometimes get annoyed with them, she considers Yukari and Nanase to be the best friends she could ever have, since they don't fear her despite her very lethal magic abilities. However, much like Kazuma, she can also be brutally honest at times, such as when she bluntly told Ren he abandoned Ayumi Tsuwabuki and that sitting around feeling sorry for himself wouldn't solve anything. Ayano also takes any insult against her family very seriously, which is especially shown in the anime with her fight against Catherine McDonald, saying she would sooner die than hand over the title of her clan to 'some random family'.

Later in the series, it is shown that, however arrogant she may act on the surface, the massive gap between her power and Kazuma's has left Ayano with serious self-esteem and confidence issues, causing her to doubt herself frequently and worry she might mess things up. During Kazuma's brief turn to the dark side, Ayano admits that she had in fact always looked up to him, wanting nothing more than to be as strong as he is and have his approval, suggesting she values this more than even that of her father's. Her insecurities are especially shown when, after Kazuma declares that he'll protect her, she takes it completely the wrong way and asks if he sees her as a helpless little girl who can't take care of herself.

Ayano's answer to a bad day 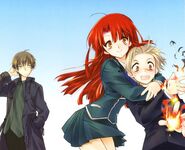 Ayano with her friends, Yukari and Nanase