Liberate Japan from the oppressive GHQ

Ayase Shinomiya is the secondary female protagonist of the anime series Guilty Crown. She is a wheelchair-bound teenage girl and a member of Funeral Parlor who pilots the humanoid robot Endlave. She is also wheelchair-bound, though she apparently wasn't always.

She is voiced by Kana Hanazawa in the Japanese version and Emily Neves in the English version.

Ayase can be described as a beautiful and slender young woman. One of the noticeable aspect of her body is her breasts which can be described as C-cup. She also seems to have a flawless body. She wears a red outfit while piloting an Endlave and a white nightdress when she goes to sleep. She also temporarily wore the uniform of Tennouzu High School when she was forced to stay at the school together with other Funeral Parlor members.

Initially, Ayase is quite cold to Shu, due to getting off on the wrong foot with him as a result of him bringing up her disability. Nevertheless, she is a kind and strong-willed person who does all she can to help Funeral Parlor, and doesn't hesitate to give credit where credit is due; when Shu suspects that he cheated in the mock battle due to the fact that he used a Void, Ayase disagrees, saying he simply made use of the one thing he was good at. She is shown to have a crush on Gai, blushing whenever he compliments her and always being concerned for his safety. However, she denies this whenever it's pointed out to her, claiming she only has respect for him.

Ayase doesn't like being pitied for her disability, insisting that it no way inhibits her ability to do her job and getting angry whenever people try to help her. However, this trait ultimately proves to be more trouble than it's worth, since it causes her to overestimate herself and forget that she simply can't do everything that ordinary people can e.g. run away when people sexually harass her. This insecurity becomes especially apparent when she goes undercover in Tennozu High School, where she's lost her ability to pilot an Endlave, which to her is like losing her legs all over again. As a result, her Void manifests as a pair of Endlave-esque legs, which enable her to sprint at great distances and even fly.

Ayase can also be rather hypocritical; she teases Shu for his obvious feelings for Inori, and yet when Shu brings up her equally obvious feelings for Gai, she denies them vehemently. She also frequently chews out Shu for wallowing in self-pity, yet does the same thing herself after Gai's death, going so far as to scold Tsugumi by saying that she wouldn't care if she died saving Gai, since to her she's only "half-alive" as it is, words that deeply hurt Tsugumi. However, after gaining the ability to fly using her Void, Ayase no longer complains and seems to regain her confidence.

Later on in the series, she seems to develop feelings for Shu, in place of her unrequited feelings for Gai. They were very subtle at first during the second part of the series, but it became more noticeable during later episodes. She cries when Shu takes the Apocalypse Virus upon himself after she pleads for him not to do it, since it could potentially kill. Shu also compliments her after carrying her to the Endlave control unit to which Ayase blushed, and later on, Ayase tells Shu not to die with her Void because she just "lent" her heart to him. In Episode 22, Ayase's feelings towards Shu became more noticeable as she refuses to abandon Shu in the collapsing GHQ building as Argo tells her that she must escape.

Overtime, Ayase becomes more and more determined, particularly after her aforementioned confidence boost. This is most noticeable when she crawls out of her wheelchair and slides down a railing in an attempt to get to the third and final Void Genome, though this ultimately proves unnecessary as Shu grabs and uses it instead. Right before the final battle, Ayase asks for Shu to help her into the Endlave control unit, implying that she's come to terms with her disability and learned to rely on others from time to time, instead of always trying to be self-sufficient.

Ayase first appears in episode 1 where she is providing protection for Inori Yuzuriha after she was being chased by a GHQ Mech and had tried to told it off. She appears again when the GHQ begins to slaughter everyone in a ghetto that were declared infected after Inori was captured. She was attacked by the psychotic Daryl Yan and was forced to abort the mission after she was almost killed by Yan. Her partner Tsugumi helped her bail out and she rallied with her. Eventually Shu Ouma joins Funeral Parlor and she becomes his mentor. While annoyed at first, she quickly becomes fond of him and begins to develop feelings for him overtime.

After the Apocalypse Virus was re-leased into the world, Ayase and Tsugami had managed to survive and made it to Shu's High School and regrouped with him. Ayase was under the disguise of a High School student but overtime the students began to deteriorate and she was soon found out by a local student and was kidnapped along with Tsugami. Ayase and Tsugami were soon forced onto the Auditorium Stage tied up and gagged when Shu had managed to save them from being turned into the GHQ.

Ayase in her nightdress 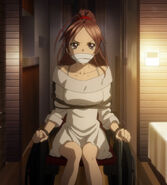 Ayase tied up and gagged

Ayase protects Inori
Add a photo to this gallery
Retrieved from "https://hero.fandom.com/wiki/Ayase_Shinomiya?oldid=1447362"
Community content is available under CC-BY-SA unless otherwise noted.