Second-in-Command of the Dora Milaje

Ayo is a recurring character in the Marvel Cinematic Universe, appearing as a minor character in Captain America: Civil War and a supporting character in Black Panther, Avengers: Infinity War and the Disney+ series The Falcon and the Winter Soldier.

She is the second-in-command of the Dora Milaje, being led by Okoye to protect Wakanda from threats and be the bodyguard of the king. After the death of T'Chaka, his son T'Challa becomes king, and Ayo helps the Dora Milaje battle against his cousin Erik Killmonger, and Thanos's army. After the heroes saved Earth from the Mad Titan, Ayo learned that T'Chaka's killer, Helmut Zemo, had escaped and became determined to find him. With the assistance of Bucky, she succeeded in apprehending Zemo and returning him to prison.

She is portrayed by Florence Kasumba.

Not much is known about Ayo's past, but she presumably was born in Wakanda and was trained to become a capable warrior for the Dora Milaje. Ayo managed to become the second-in-command of the Dora Milaje under the leadership of Okoye, and was tasked with protecting Wakanda and its monarchs, King T'Chaka and Queen Ramonda. According to Ayo's conversation with Bucky Barnes in The Falcon and the Winter Soldier, King T'Chaka chose her specifically from other Dora Milaje.

Ayo traveled to Vienna to attend T'Chaka ratifying the Sokovia Accords, but the king was killed by Helmut Zemo in an effort to incriminate the Winter Soldier for his crimes. After T'Chaka's death, Ayo was tasked with escorting T'Challa to his car after the Winter Soldier escaped from custody with the assistance of Captain America. When Natasha Romanoff attempted to speak with T'Challa, Ayo told the agent to move, or she will personally move her. She was stopped by T'Challa, who decided to get help from Natasha so they could apprehend the Winter Soldier.

When T'Challa and Okoye returned from saving Nakia, Ayo was tasked by the general to take her to the River Province so she could be ready for the ceremony. She attended the ceremony and witnessed T'Challa battle M'Baku, whom challenged the prince for the throne, and congratulated T'Challa for becoming king and defeating M'Baku. When Erik Killmonger entered Wakanda with the corpse of Ulysses Klaue, he revealed that he was the son of N'Jobu, the brother to T'Chaka and challenged T'Challa for the right of the throne. Ayo witnessed the duel between the two, and asked Okoye if anything could be done when Killmonger was battling T'Challa.

After the death of Zuri and T'Challa being thrown over the falls, Ayo was forced to submit to the traditions and serve Killmonger as the king of Wakanda. She sat beside Erik who was on the throne, and Killmonger ordered his servants to gather all of the vibranium there so they could prepare to ship them across the world. T'Challa returned and Ayo rebelled against Killmonger and the Border Tribe, and the Dora Milaje were assisted by the Jabari Tribe.

The Border Tribe were forced to surrender, and T'Challa succeeded in defeating his cousin, thus stopping his tyranny. After the battle, Ayo attended the delegation to the United Nations with T'Challa, Nakia, and Okoye, where she heard the king reveal Wakanda to the rest of the world. After T'Challa defeated Killmonger, Ayo assisted Shuri in curing the Winter Soldier from his brainwashing, and helped him go through the process.

When the Avengers arrived to Wakanda to receive help from T'Challa to stop Thanos and his army, Ayo was tasked with protecting Shuri while she was working from removing the time stone from Vision's head. When Corvus Glaive attacked the Dora Milaje, Ayo was knocked unconscious alongside Shuri, and Glaive started to fight Vision for the infinity stone. It's unknown whatever Ayo was one of many who were erased from existence by Thanos, but it's possible she survived and continued to serve the Dora Milaje.

The Falcon and the Winter Soldier

When Ayo learned that Helmut Zemo was broken out of prison, she was tasked with finding him and presumably have him return into confinement. She then traveled to Latvia, where she left a trail of Kimoyo beads for Bucky to find, and confronted him, asking where Zemo was. Ayo made a deal with Bucky that he had eight hours until she and the Dora Milaje would find and apprehend Zemo personally. Once the eight hours were up, Ayo and the Dora Milaje arrived to apprehend Zemo, but battled federal opatives John Walker and Lemar Hoskins. Zemo escaped during the fight, and Ayo expressed her disappoinment in Bucky since her and Zuri helped him break free of his brainwashing.

After defeating Walker, Ayo and the Dora Milaje left to find Zemo, and eventually learned from Barnes that Helmut traveled to Sokovia. The Dora Milaje then arrested Zemo and sent him to the Raft, but Ayo spoke with Bucky that he should stay clear from Wakanda for a while for his actions. Before she left, Bucky asked for a favor for the Wakandan Design Group to create new wings and a new suit for Sam, who had decided to accept the mantle of Captain America. 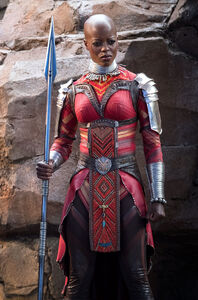 Ayo with Ramonda and Shuri. 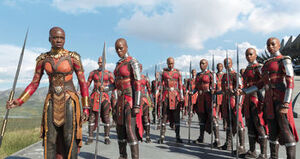 Ayo with the Dora Milaje.