No information
Azalea is a human female golfer in the Mario Golf series.

In the Game Boy Color version of Mario Golf, she is one of four characters that the player can choose from at the beginning of the game and train however they like. Azalea can then be uploaded to the Nintendo 64 version of the game to play as. In Mario Golf: Advance Tour, Azalea defeats Tiny, takes the title as champion of the Dunes course, and sides with him as a doubles partner for the Dunes Club Doubles Cup. When Neil orElla defeats her, she realizes how Tiny must have felt when she defeated him.

According to the Mario Golf manual, Azalea is seventeen and is an experienced athlete who also runs track. Also according to the Japanese website of Mario Golf, her form was poor the first time she attempted golf, but with her father's help, she has improved over two years of training. 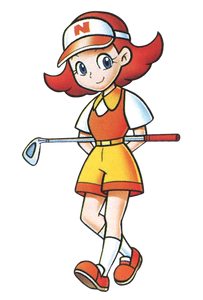