Improve and help everyone with their sacred gears.

Azazel is one of the main protagonists of the light novel and anime series High School DXD. He is the former Governor General of the Fallen Angels and Grigori. He now acts as a teacher at Kuoh Academy and the advisor of the Occult Research Club.

He is voiced by Rikiya Koyama in the Japanese version of the anime and Phil Parsons in the English version.

Azazel is a tall man appearing to be in his twenties with an average build, black hair, golden bangs and black goatee. He also possesses twelve jet-black feathered wings that grows out from his back. It is described by Vali to be a never ending black.

After the events in Volume 4, he loses his left arm but replaces it with a prosthetic arm made from his Sacred Gear research.

It is hard to determine Azazel's personality as he is laid-back yet serious, while also wise and insane at the same time. His character seems to reflect upon the situation at hand. Azazel is a research fanatic, especially on Sacred Gears. He is also shown to be pacifistic, preferring to talk his way out of troubles rather than resorting to violence. He has been shown to care deeply for his fellow Fallen Angels, Shemhazai, and Baraqiel.

Azazel has also been shown to be extremely charismatic, being able to endear his Fallen Angel followers. Azazel has complicated feelings on the fact that many of his friends and acquaintances are all married and have a family. It is suggested that Azazel is a pervert because of his fondness for breasts, and also the fact that he has stated to have had hundreds of harems over the millennia. Not to mention that his stated reason for becoming a Fallen Angel all those millennia ago, was lust.

Originally an Angel from Heaven, during his time there, Azazel had once written a report on his Artificial Sacred Gear, the Blazer Shining Aura Darkness Blade, which was published by Michael much to his embarrassment. Azazel later lost his place in the Heavens after having sex with a human woman and became a Fallen Angel as punishment from God. Shortly after that, he created the Fallen Angels' organization, Grigori, and became its Governor General. During the Great War between the Three Factions, the Fallen Angels were the first to retreat due to Azazel's order after he had lost many of his subordinates. After retreating from the Great War, Azazel starts to research on Sacred Gears, creating Artificial Sacred Gears. He also made a contract with one of the Five Great Dragon Kings, Fafnir, during his research on Sacred Gears.

Azazel introduced himself to Issei. He later attended the meeting between the leaders of the three factions and was the one to proposed the peace treaty. He later fought against Katerea Leviathan and was able the defeat the latter at the cost of losing his left arm. He becomes the advisor for the Occult Research Club

He accompanies the entire Occult Research Club in their trip back to the Underworld, planning their training menu. He also visits Issei when Issei was training in the mountain with Tannin, handing Issei the lunch box made by the Rias, Akeno, and Asia, asking Issei on his feelings on Akeno and leaving after getting the answer he wants.

Azazel helped in fending off the Devils of the Old Satan Faction before sensing Ophis who appeared on the spot, challenging Ophis who simply says that Azazel cannot defeat her. He later composed the Oppai Dragon Song to help Issei release his Juggernaut Drive.

Azazel is shown to be busy traveling back and forth between the Underworld and human world. While being assigned as Odin's Bodyguard, he asked his friend, Baraqiel, to temporarily take over. After Issei and Akeno met Odin, Rossweisse and Baraqiel while on their date, they all went to the Hyoudou Residence, where Azazel explains the reason to Odin's visit to Japan before going to an Oppai Club with Odin. He later assisted in the initial battle against Loki and Fenrir, with Loki retreating after the Vali Team appeared, despite having the advantage. He later implanted Vritra's remaining Sacred Gears into Genshirou Saji, whom he sent to assist in the battle against Loki.

Azazel accompanies the second-year students of the Kuoh Academy to Kyoto, finding out that the Kyoto's Youkai leader, Yasaka, was kidnapped by the Khaos Brigade. Azazel and the Gremory Team eventually found the culprits who kidnapped her, the Hero Faction, lead by Cao Cao, telling his students to be careful of the True Longinus Cao Cao possesses. He then goes one-on-one against Cao Cao, which ended in a draw as both sides did not go all-out. He later told Issei he called for a "reliable backup" in the form of Sun Wukong and Yu-Long.

Azazel takes Issei to meet up with some of the Gods watching Rias and Sairaorg's Rating Game, getting along with many of the Gods except for Hades, who he tells Issei to be aware of as Hades is stronger than him. After the Rating Game between Rias and Sairaorg, Azazel went to confront Indra, asking the God if he had known Cao Cao and the whereabouts of the True Longinus which Indra revealed it himself, making Azazel angry. Indra simply says back that what Hades is doing can change the maps of all the factions, making Azazel think on how much he knows. After Indra leaves, Azazel comments on Ophis' ambition that is causing the world to become Chaos. He was later seen visiting Sairaorg, talking with him until Misla's butler came to tell them that Sairaorg's mother had awakened.

Azazel sets up a meeting between Issei and Ophis. He later accompanies the Occult Research Club members to the Underworld for Issei, Akeno, and Yuuto's Mid-Class promotion test. While those three were taking a rest after the test at a hotel, they are suddenly attacked by Cao Cao and Georg who reveal that they have Samael with them. He then equips his Artificial Sacred Gear but was easily defeated by Cao Cao who used his Medusa's eye on Azazel. After the team was defeated by Cao Cao and Georg, they are attacked by a legion of Grim Reapers sent by Hades with Azazel battling with the Ultimate-Class Grim Reaper, Pluto, one-on-one which ended abruptly by the sudden appearance of Shalba Beelzebub who kidnaps and brainwashes Leonardo, forcefully activating his Balance Breaker, creating 13 gigantic monsters that caused the Dimension Create by Georg to start crumbling. At the end of Volume 11, Azazel, with Vali and Tannin's help, opens the Dragon Gate to summon Issei but was surprised to see only the Evil Pieces returned. Realizing what it meant, he falls down to his knees while scolding Issei for being an idiot.

After reporting Issei's situation to Sirzechs, he and Sirzechs go to the Underworld with Dulio Gesualdo and Slash Dog as their escorts. While initially thinking that they might have to attack Hades together, after Sirzechs reveals his "true form", Azazel was relieved to find out that Sirzechs' power is ten times more than the original Lucifer, remembering what Lord Gremory told him during their conversation about Sirzechs and Ajuka being Super Devils. After the monsters created by Annihilation Maker are destroyed, ending the crisis of the Underworld, Azazel steps down from his post as Governor General of the Fallen Angels. At the end of Volume 12, Azazel reveals that he was given the post of Supervisor of Issei's town, which is an important alliance location, and became Grigori's Advisor of Special Technology before handing them their certificates for passing the Mid-Class promotion test. 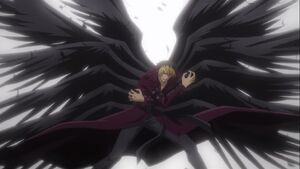 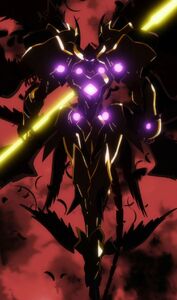 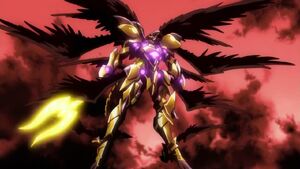 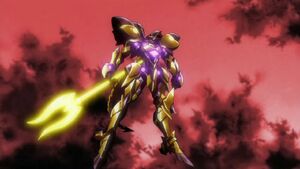 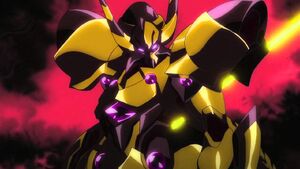 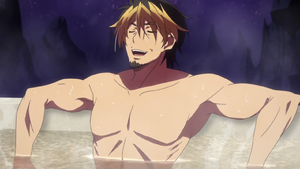 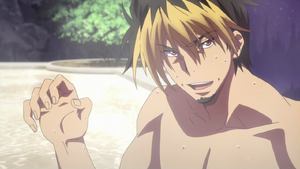 Azazel bathing
Add a photo to this gallery

Retrieved from "https://hero.fandom.com/wiki/Azazel_(High_School_DXD)?oldid=2146934"
Community content is available under CC-BY-SA unless otherwise noted.