Give Xerath a higher status than being a slave (formerly)

Azir is a heroic playable champion in the MOBA League of Legends. He was the emperor of the Shuriman Empire who befriended a slave when he was younger, whom he gave the name Xerath. Azir eventually became emperor and sought to become an Ascended being, but Xerath betrayed him and destroyed the empire after years of hidden resentment. Millenia later, his descendant Sivir revived him and he was finally able to become an Ascended, and from now on he seeks followers to help him rebuild Shurima in his own image.

The 121st champion added to the game, Azir was released on September 16, 2014. He is commonly played in the middle lane.

He is voiced by Travis Willingham (who also voices Roy Mustang, Knuckles the Echidna, Guile and Reno Jackson) in League of Legends, and Iké Amadi in Legends of Runeterra.

Azir was born as the youngest son of the original emperor of Shurima, who had little chance of becoming destined for greatness due to his siblings being older and having more promise than him. The heroic brothers Nasus and Renekton were role models towards Shuriman youth, but Azir took more interest reading in Nasus' Great Library than being trained by Renekton. One day, he met a slave boy who would routinely search the library to retrieve books for his master. The two became best friends and Azir began to see him as more than a slave, giving him the name Xerath (meaning "one who shares"). As it was illegal to name slaves in Shurima, Azir avoided publicly naming him. The two boys bonded over their admiration for Shuriman history and Ascended heroes.

One fateful day, Azir was travelling with his family along with Xerath and Renekton. Azir and Xerath left the caravan to draw the constellations to add more star charts to the Great Library. In their absence, the caravan was attacked by group of assassins sent by the enemies of the empire. Renekton succeeded in protecting the emperor and defeated most of the assassins, but all of Azir's brothers had been killed. One of the assassins prepared to kill Azir, but Xerath took the dagger while Azir freed it and killed the assassin in self-defense. Azir asked his father to reward Xerath for saving his life, but the emperor saw only contempt towards him for being a slave, and started to hate Azir and wished that only he could've died instead. For many years since, the emperor staged brutal massacres towards anyone suspected of treason, and kept on trying with his still-fertile wife to make a more worthy heir. Xerath was worried that Azir's life was hanging by a thread, and he would be thrown away as soon as his mother got another baby. He told Azir to train in combat under Renekton's guidance, and Azir soon promoted Xerath to his right-hand man, appointing him to find knowledge to help him.

Tragedy after tragedy strick Azir's family, with his mother suffering from multiple miscarriages and getting killed alongside her successful newborn by a storm striking her palace. This fuelled rumors that Azir was a curse, which he took offense to and ordered anyone who perpetuated the rumors to be executed. Later, the emperor and his guards were found reduced to charred pieces on the floor. Xerath told Azir that a conquered city of mages were responsible, so Azir led his army to massacre the city in retaliation. Unbeknownst to Azir, Xerath had orchestrated every single event by using his task to find knowledge as a way to study dark sorcery, from killing the babies when they were still in the womb, to summoning elemental spirits to kill the empress and obliterating the emperor and his guards with bolts of magic. Xerath had been fuelled by years of resentment towards being a slave and became obsessed with power and conquest, even manipulating his lifelong friend in order to do so.

When Azir finally became emperor, he planned to make a societal reform by abolishing slavery in Shurima and giving slaves better lives before freeing them for good. However, he had kept his plan secret from Xerath in order to surprise him, which caused Xerath to believe that Azir had lied and broken his promise. Eventually, Xerath persuaded Azir to become an Ascended, which he accepted. When the ritual came, Azir made an official decree to free all slaves before beginning the Ascension ritual. While this could've been what Xerath would have wanted, he had already made up his mind and blasted Azir off the dais and took the Ascension himself. Azir was left to die burning and disintegrating as he watched his friend become a being of pure energy and destroy the Shuriman Empire.

Thousands of years later, Azir's distant descendant Sivir stumbled upon the Tomb of Emperors. Her friend Cassiopeia betrayed her by stabbing her in the back with a dagger, which in turn resulted in her transforming into a half-snake hybrid and Xerath and his mind-broken pawn Renekton being released from the tomb. Sivir's blood spilled across Azir's desecrated body, reviving him as a zombie. He picked the dying woman up and saw potential in her as she carried his bloodline, and took her to an oasis which healed her wounds and saved her life. This in turn caused Azir to Ascend as he was originally meant to, becoming a hawk-headed God-Warrior with the ability to control sand itself.

Azir headed back to the ruins of Shurima, where he erected a new Sun Disc and routed the sacred waters from the temples to bring Shurima back to life. Then he weaved the sand to form an image of what occurred in the past. He realized Xerath's treacherous plans, killing the royal family and causing his death and the destruction of the empire. He saw that Xerath was still in Runeterra somewhere, and started building an army of sand soldiers while swearing an oath: to reclaim his lands and take back what was his.

Azir is a proud, determined ruler who sees potential in others. While he originally had no chance of being emperor, he befriended Xerath and saw him more than just a mere slave, but also a friend and even a brother. He wished to repay Xerath by giving him rewards and a higher status, but the societal values of Shurima prevented this. Despite this, Azir wished to become emperor to abolish slavery and give Xerath what he would've wanted, but his power led to him becoming hubristic, which was Azir's biggest weakness and one of the causes of Shurima's downfall. While he did have selfless intentions for the empire, his arrogance prevented him from communicating his goals with Xerath and seeing when he was being manipulated, and his shortsightedness towards the consequences of his actions caused Xerath's resentment to grow to the point where by the time he announced his plan, it was too late and Xerath had already made his decision to betray him. Since his resurrection, Azir now wishes to rebuild the empire in his original plans, calling upon the help of his allies in order to do so.

Azir dislikes Sivir's graverobbing profession, but trusts her since she is family and she gave him the chance to continue his goal after it was taken away from him. In contrast, he despises Cassiopeia for almost ending his bloodline forever.

Azir as he appears in Legends of Runeterra.

Azir's final form, in front of the restored Sun Disc. 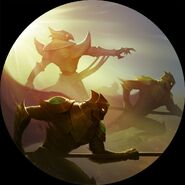