A Grey Matter (by Ben Tennyson)

Smartest Being in five galaxies.
Sculpter of planets.
Azmuth of the Galvans.

Ben 10: Secret of the Omnitrix

Make Galvan B inhabitable.
Create the best example of the Omnitrix

Azmuth is one of the supporting characters of the Ben 10 series. He is the creator of the Omnitrix, along with numerous other inventions and creations. He is a Galvan from the planet Galvan Prime.

Azmuth is very paranoid, as evidenced by the amount of work he puts into hiding his home from the rest of the universe. He is a bit impolite. He originally refused to repair the Omnitrix in Ben 10: Secret of the Omnitrix, and was willing to let the universe get destroyed.

Azmuth was very pessimistic, unwilling to shut down the Omnitrix's self-destruct at first, despite it meaning the destruction of the universe. The reason why is that he simply didn't believe the universe was worth saving. This is because he invented the Omnitrix so the aliens of the universe would have a better understanding of each other, but other people like Vilgax only wanted to use it as a weapon of war. In Ben 10: Alien Force, Azmuth has become less pessimistic and more serious, showing a no-nonsense personality in War of the Worlds. This is especially apparent in Map of Infinity, where he was dealing with a disaster of intergalactic proportions, and when the universe or galaxy is being threatened.

But despite everything, Azmuth is good at heart and always thinks about the betterment of society.

According to Maltruant, no matter the alternate dimensional timeline, Azmuth is always too smart to be evil, meaning he would not help in evil acts anywhere in space-time.

As a tadpole he achieved a perfect score on his GATs before he became the first thinker.

In his youth, Azmuth enjoyed a relationship with a female Galvan named Zennith, and while on a date with her witnessed a planetary alignment. The sight inspired Azmuth to create a powerful sword, which sadly brought his romance with Zennith to an end as she disapproved of his creation. Later realizing for himself the dangers of the sword, Azmuth began to dedicate himself to peaceful science, eventually creating the Omnitrix, hoping to create a means for the races of the galaxy to live in harmony. He also hoped that it might redeem him in Zennith's eyes.

In Trouble Helix, Azmuth appeared in a flashback, where it was revealed that he was involved in Galvan B's transformation and the creation of the Galvanic Mechamorphs.

In Secret of The Omnitrix, Azmuth was found in his lab on Xenon by Cannonbolt, Tetrax, and Myaxx, where he is eventually convinced to turn off the Omnitrix's self-destruct. He also unlocked Way Big so Ben could defeat Vilgax. Azmuth modified one of Vilgax's drone's heads to be able to leave Xenon in it, taking Myaxx with him.

Ben 10: Destroy All Aliens revealed that Azmuth, inspired by Ben's obvious concern for his family, decided to reunite with his own after a long absence. After detecting a strange signal coming from the Omnitrix (caused by Gwen casting a deconstruction spell on Upgrade), he contacted Tetrax and arranged to meet the Petrosapien on Earth. Traveling to Earth using his drone-head ship, Azmuth disguised it as a semi-truck and headed for his rendezvous with Tetrax. He was then contacted by his concerned father, who watched as a strange light-coming from the malfunctioning Omnitrix-shone over Azmuth and his ship crashed.

When a malevolent looking To'kustar appeared on the video feed following Azmuth's disappearance, his father came to believe that Azmuth had perished at the hands of the giant alien. Donning a set of Mechamorph Armor created by Azmuth, his father traveled to Earth, where he ran into Ben. At first unaware that Ben was transforming between different alien forms-unable to revert to human due to Tetrax activating a feature of the Omnitrix-he demanded to know the whereabouts of the To'kustar. Ben had fought the giant alien only for it to disappear; he and Azmuth's father would later discover that the being had been downloaded into the Omnitrix.

Following the To'kustar's escape from the Omnitrix, the Tennyson family realized that the giant being was Azmuth himself, mutated by the malfunctioning device and so disturbed by the change that he was unable to recognize his own father or friends. Eventually they brought him out of it, and Azmuth used the Mechamorph armor to repair the Omnitrix and revert himself back into his normal Galvan form. Azmuth's father then revealed his own Galvan form, which was younger than that of his son-this was due to Azmuth transferring his father's mind into a clone body.

Father and son forgave each other for their misdeeds, with Azmuth confessing that he should have warned his father about the armor's tendency to increase aggression. Azmuth also helped restore Ben's parents, who had likewise been transformed into aliens, to normal. He commented on the Omnitrix's malfunction being caused by a Mana overload, confusing Gwen, who was ignorant at the time of her Anodite lineage. Azmuth and his father then returned home.

Five years prior to OmniverseEdit In a flashback in Trouble Helix, Azmuth was working on a second Helix with Albedo, where Max comes in, asking him to fix the malfunctioning Omnitrix, to which he refuses. XLR8 comes and makes him by breaking one of his machines. Azmuth later revealed his hand in the creation of the Galvanic Mechamorphs through his experiment called the Helix, in the intent of making Galvan B habitable. He also revealed he had been working for many years on trying to heal Malware, a Galvanic Mechamorph whose life code is corrupted and incomplete.

In a flashback in Showdown: Part 1, Azmuth warned Ben to not overuse Feedback, but Ben did not heed his warning and Feedback was lost from the Omnitrix.

During a flashback in Showdown: Part 2, Azmuth helps comfort and advises Ben, after Ben lost Feedback.

Azmuth returned in Good Copy, Bad Copy. Azmuth revealed that Albedo used to be one of his assistants, and that he had came to take the Omnitrix copy from Albedo. Azmuth states that only one Omnitrix is allowed in the universe (though later on, Azmuth began to create an improved version).

In War of the Worlds, Azmuth and Paradox warn Ben that the Highbreed are conquering and destroying planets, and their fleet was heading towards Earth. Galvan Prime has already been destroyed and its destruction would be the beginning of the end. Although he doesn't want Ben to fight, Azmuth realizes that there's no stopping him and activates the Master Control for the sake of the battle. When the Omnitrix was reset by the DNA wave Ben used to stop the Highbreed (locking the Master Control), Azmuth left to help rebuild Galvan Prime without reactivating it, telling Ben to "have fun figuring it out."

In The Vengeance of Vilgax, when Ben and Kevin tried to hack the Omnitrix, Azmuth contacts Ben telling him not to tamper with it, stating that he will learn how to activate the Master Control when the time is right. When an accident unleashes Chromastone, Goop, Spidermonkey, and Way Big from the Omnitrix, Azmuth instructs Ben to reabsorb the alien forms into the Omnitrix. Dissatisfied with what happened, Azmuth also tells Ben that he won't help him again.

In Primus, Azmuth wields the Omnitrix in order to protect Primus from Vilgax, but is defeated and Vilgax takes the Omnitrix from him. Azmuth himself attributes his defeat to his "skills being a little rusty." He is saved by Ben, who manages to trick Vilgax by showing him how to use the Omnitrix. Ben gets Vilgax to transform into Goop, allowing Ben to get the upper hand and remove the Omnitrix from Vilgax. In the end, even though Azmuth hasn't forgiven Ben for damaging the Omnitrix, he allows him to keep it anyway.

In The Final Battle, Myaxx informs Azmuth that the Ultimatrix was stolen. Myaxx also shows security footage of Ben, or someone who looks exactly like him, stealing the Ultimatrix; Albedo, to which Azmuth replied "No! Not him! Anyone but him.". In the later half of the episode, Azmuth answers Ben's plead for help. He explains to Ben that the Omnitrix was originally meant for Max. When Ben says he let Azmuth down, he agrees. Azmuth tells Ben that "winning isn't so easy without the Omnitrix", making Ben realize that the only way to defeat Vilgax would be to destroy the Omnitrix. Azmuth reveals he thinks that Earth has lovely weather. 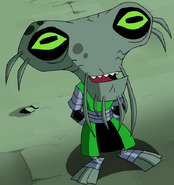