Ability to fly in his companion form

Azurda is one of the supporting characters from Xenoblade Chronicles 2. He was the mentor to Rex.

He was voiced by Shigeru Chiba in the Japanese version, and by Sean Barrett in the English version.

Azurda fought alongside Addam and Mythra, as well as the other Titans and Blades, against Malos during the Aegis War. After the war, when Addam had finished his travels, he came to Fonsett Village, then called Hero's Rest, and tasked Azurda with protecting not only the village, but the third Aegis blade that Addam had sealed away there.

After Rex's parents passed away, Rex grew up under Corinne's house and eventually became a salvager. He set off in the salvaging business while living on Azurda, who he refers to as Gramps. At the beginning of the game, Rex and Azurda see another Titan sink beneath the Cloud Sea, and Azurda mentions that he too will suffer a similar fate eventually.

When Rex accepts the offer with a large sum of money, Azurda scolds him on accepting a job he has no idea about, though Rex still helps bring up the Ancient Ship nonetheless. Azurda eventually helps Rex, Pyra, Nia, and Dromarch escape from Jin and Malos, though he is hit multiple times by the Monoceros. He crash lands on Gormott and is forced to revert to his larval stage to continue living. He talks to Pyra that same night, and Pyra promises to take care of Rex.

After King Eulogimenos reveals that a third Aegis Sword exists, Azurda states that he knows its location and reveals himself to be the guardian of Fonsett Village. He then opens the pathway into Spirit Crucible Elpys, the location of the third Aegis Sword.

When the World Tree begins collapsing, Pneuma steps aside and talks with both Poppi and Azurda. Pneuma touches Azurda's Core Crystal while Azurda compliments her efforts. It is later revealed that Pneuma allowed Azurda to transform back into his Titan form so that the rest of the party could survive the trip back to Alrest. Azurda then takes the party to the new landmass revealed to them by the Architect. 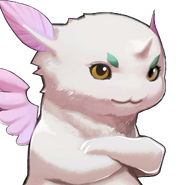 Add a photo to this gallery
Retrieved from "https://hero.fandom.com/wiki/Azurda?oldid=2134827"
Community content is available under CC-BY-SA unless otherwise noted.