Waiter at the Benbow Inn

B.E.N. (Bio Electronic Navigator) is a rusted old robot with big eyes and thin arms and legs and a supporting character in Disney's Treasure Planet. He is voiced by Martin Short.

He was once the navigator of the legendary space pirate, Captain Flint. That is, until his boss Flint stranded him on Treasure Planet. Flint also removed the memory chip that B.E.N. to keep him from revealing his self-destruct mode for Treasure Planet. B.E.N was trapped on Treasure Planet, until Jim Hawkins and the shape-shifter Morph came along. B.E.N was able to remember one clue that would lead Jim to Flint's treasure. He reveals that the treasure is "buried in the centroid of the mechanism." In exchange, Jim allows B.E.N to come along with the crew on their adventure, as long as he didn't talk so much and touch Jim. Later that very same evening, Jim, Morph, and B.E.N go on the R.L.S. Legacy to retrieve the map, quietly. B.E.N went to disable the laser cannon for Jim. 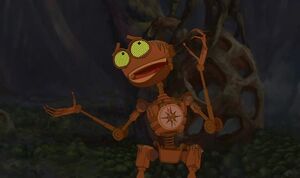