He is referred as "The Mighty Black Skull Dragon" as the fans said. He has the horns of Summoned Skull, and Red-Eyes B. Dragon's face mixed with a fiend's face. He can breath fire by shooting fire on the opponents.

This card is owned by Joey and Yugi during the appearances of the show. In French dub version, his name is Dragon Crâne Noir who has the French name of this card, he was first seen where Joey and Yugi fuse Red-Eyes B. Dragon and Summoned Skull into a composite being via "Polymerization" a Spell (Magic) Card able to fuse two or more monsters into a composite being, then the "Fusion Recovery" is a Spell (Magic) Card that is able to bring "Polymerization" back from the player's graveyard.

He was seen defeating the Paradox Brothers' monster. 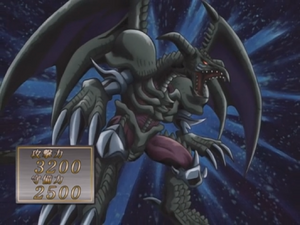 B. Skull Dragon as seen in the anime series of Yu-Gi-Oh!