Fashion
Hanging out with her yomies (friends)
Eating

BB is one of the main protagonists of the FreeFonix TV series.

She is voiced by Shelley Longworth who also voiced Lady Lux from FreeFonix.

Her worst fears are not being noticed by anyone or looking like Lady Lux and she dyes her hair and wears contact lenses. When she was younger, she looked pretty geeky with pink rimmed glasses and messy hair. She flies a pink b-board and uses a pink and green phone.

BB, along with the rest of the band Freefonix are Sonic Warriors who can wield the power of the 13th note. BB is the singer of the group who uses her voice and microphone to fight during sonic battles, where she shoots out pink rays of kinetic energy to knock back her enemies. 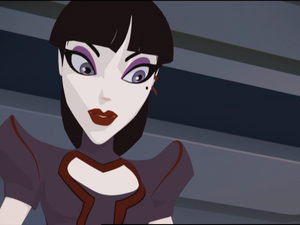 BB figures out that she swapped bodies with Lady Lux. 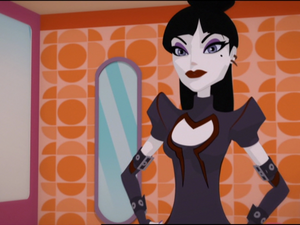 BB in Lady Lux's body in the episode Bizarro BB.
Add a photo to this gallery

Retrieved from "https://hero.fandom.com/wiki/BB?oldid=1771621"
Community content is available under CC-BY-SA unless otherwise noted.