To get coffee (succeeded)

Baby/Miles is the main protagonist in the 2017 action crime thriller movie Baby Driver, directed by Edgar Wright. When he was a boy, his parents died and he was adopted by Joseph. And he works here with Doc, a crime boss who taught him as a Getaway Driver and found by criminals, after that he brings coffee. And he met a waitress named Debora. So as long as he’s in Prison writing a note for Debora.

He was portrayed by Ansel Elgort who had played Caleb in Divergent series.

Baby is a young carjacker turned getaway driver. A car accident in his childhood killed both his parents and left him with tinnitus, and he constantly listens to music through his earbuds as a form of catharsis. He is indebted to Atlanta-based crime boss Doc, who employs him as the driver for various heists throughout the city. Baby also cares for Joseph, his deaf foster father, and produces remixes of audio he records throughout the day. After a bank robbery with fellow heisters Griff, Darling, and Buddy, Baby is informed by Doc that he is one heist away from paying off his debt.

At Bo's Diner, a diner where his mother once worked, Baby meets a new waitress named Debora. The two bond over music and driving, and discuss a mutual desire to leave Atlanta on a road trip out west. Later, Doc assigns Baby to an armored truck robbery with heisters J.D., Eddie, and deranged loose cannon Bats. The crew narrowly succeeds, and satisfied that his debt to Doc is paid, Baby finds legitimate work and starts dating Debora. However, after Doc threatens to harm Debora and Joseph, Baby is coerced back into his syndicate.

When Baby drives his car, three criminals were robbing at a coffee store. And he drives along within ten weeks. Then after weeks his adopted father Joseph who teaches sign languages to learn he couldn't speak when he make his music on the recording session of "Was he Slow".

Baby in the film 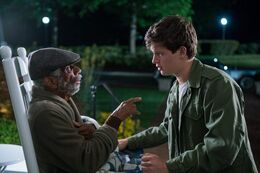 Baby to his deaf father Joseph Are you a mute? Baby waiting for the robbers to get in the car.
Add a photo to this gallery
Retrieved from "https://hero.fandom.com/wiki/Baby_(Baby_Driver)?oldid=1890667"
Community content is available under CC-BY-SA unless otherwise noted.