Ice Age: Dawn of the Dinosaurs

To protect Sid from Momma Dino, later to be with their real mother (both succeeded)

The Baby Dinos are the tritagonists of Ice Age 3: Dawn of the Dinosaurs. They are three baby Tyrannosaurus Rexes who were adopted and raised by Sid, only to be later raised by their mother Momma.

They were all voiced by director Carlos Saldanha.

Sid found and stole the eggs from their mother after he thought they were abandoned and raised them himself. He was later taken away by Momma for stealing her children. After being raised by Sid, they have an unusual behavior as a result of not being brought up by a dinosaur such as mimicking Sid and dancing.

They are shown to be playful and rambunctious, often at times mimicking Sid or dancing with him. They often get hungry and will cry when they want food. They can also be very brave, seen when they defended Sid from their real mother who was about eat him. When Sid was taking them to the playground they used their strength to destroy the playground and eat most of the other children with means that they are very incautious.

The eggs of the baby dinos were first found in an ice cave by Sid, who took them away to be warm. The next day, their mother came out from the Dino World to find them. Meanwhile, they hatched into three baby T-rexes whom Sid named Shelly, Egbert and Yoko. They thought that Sid was their mother (since he was the first thing they saw when they hatched). Sid bathed them, then fell asleep, and they mimicked him.

Later they were playing hacky-sack with Scrat, then they jumped on Sid, and bit his fingers. He then went to get milk from an ox. He finds out it's a male, and it chases him, with the Baby Dinos in tow. Later, they want to go into Manny's Playground, Sid let them in, and of course that led to trouble, all the kids in the valley rushed into the playground, and began to destroy it. Manny and Ellie showed when Egbert ate Little Johnny, Madison, and flung Ronald through the air. Egbert spat up the two kids he swallowed, then ran past Manny's Ice Mobile, knocking it loose and shattering it. The three baby dinos returned, when Manny was about to lecture them, but their mother showed up, and took them away, along with Sid, back to the dino-world.

Momma decided to let the baby dinos go, but proceeded to eat Sid, while hanging on by a vine, flinging him up into her nose. She sneezed him out, and the baby dinos watched in disgust. She tried to eat Sid, but the baby dinos confronted her by getting in her face, but they couldn't stop Momma from flicking Sid with her tail, and tying him up in a tree. Later, Sid tried to feed them various vegetables which they hate, flipping the table on him. Momma then dropped a flightless bird down on the vegetables' place for her children to eat. She flicked Sid into the pond, but he came back as the baby dinos were about to eat the bird. The bird then woke up, and clung to Sid, scared. Out of his normal stupidity, he threw the bird off a cliff, without thinking if it could fly or not. It was then eaten by Quetzacoatlus. Disgusted, Momma then brought the baby dinos a large drumstick, which they ate while Sid and Momma are arguing. They were revealed to be plump with the leg afterwards. It made Sid angry that they liked meat since the baby dinos are carnivores, but Momma's gloating was cut off when she heard a loud roar from Rudy. She took the baby dinos into the jungle with her, along with Sid hanging by her tail.

The last time they are seen up till the end of the film was them playing with each other while trying to evade Rudy. They disappeared into the jungle, not knowing they left Sid behind. They were later seen again briefly watching Roger take Sid away. They appeared one last time after Momma shoved Rudy off a nearby cliff to his presumed death, roaring in victory. The baby dinos are soon shown with Momma snuggling them, then running over to Sid to be with him one last time. They then ran off and join with their mother, possibly to find a new home or see their father. 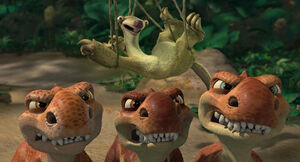 Baby Dinos defending Sid from being eaten by their mother 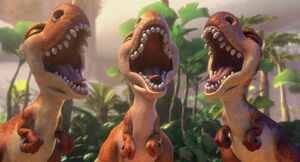 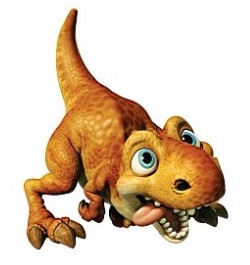 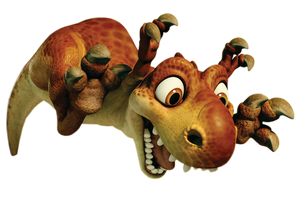 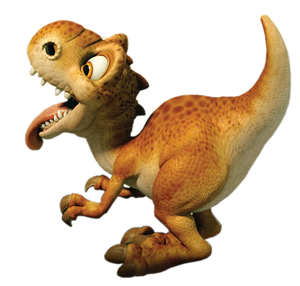