Mordecai and Rigby then go back to the park to play video games which the ducks are good at and beat Rigby three times. Benson arrives and tells them he wants them to finish cleaning the fountain and tells them to find someone to take the baby ducks so Mordecai and Rigby find a duck obsessed man who wants them but they refuse and leave the ducks swimming in a pool. The baby ducks' mother calls and wants to see them but the ducks were kidnapped by the Duck Collector. The Mother Duck, along with Mordecai and Rigby, pursue and cause the truck to crash into the park fountain; as a result, the ducks escape yet the Duck Collector returns and attacks Mordecai, Rigby, and the duck mother, claiming he'll "have those ducks". However, the ducklings, not wanting their friends and mother to get killed, transform into a giant with a duck's head and splits the collector in two, creating a mushroom cloud. Then the ducks turn back to normal and go to their mother as they thank Mordecai and Rigby and fly off with their mother.

They later appear in Exit 9B to fight Giant Susan, then she crashed it on freeway when they spot Duck Collector gets launched in the air, and the Baby Ducks (in transformation) then sees him while saying "STEP OFF", and kills the Duck Collector once and No Rules Man laughs and is then grabbed by the Baby Ducks (in transformation) in which they put him in the porta potty, shakes it, and kicks the porta potty. It launches in the air with No Rules Man in it, and is hit by a passing airplane, causing it to explode.

There are four baby ducks who look exactly the same. They are yellow baby ducks with orange beaks and black pupils. Mordecai & Rigby found them at the fountain.

The Hyperduck is the Baby Ducks' original fusion form. It first appeared in their debut episode A Bunch of Baby Ducks.

Hyperduck Ultimate Fury Giga Wing is an upgraded version of the Hyperduck.

These are the powers of the Baby Duck's Hyperduck form. 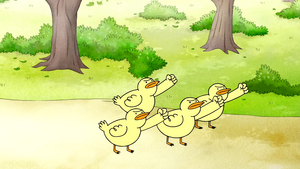 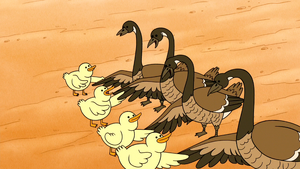 The Baby Ducks finally made peace with the Geese. 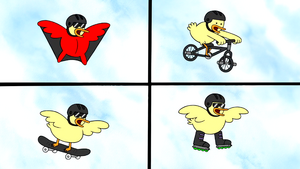 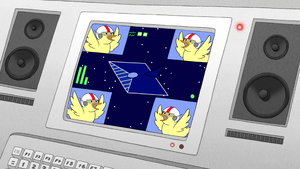