Sidekick
Baby Herman is Roger's major co-star in the animated shorts in which they appear. He is Roger's best friend. Baby Herman's "mother", Mrs. Herman (voiced by April Winchell) makes an appearance at the beginning of Who Framed Roger Rabbit and its spin-off short films, but she is only shown from the waist down.

Herman and Roger Rabbit comprised an Abbott and Costello-like comedy team for the (equally fictitious) Maroon Cartoons studio in the 1940s. A typical Roger/Baby Herman cartoon consists of Roger being given responsibility for Baby Herman's well-being; Herman immediately begins crawling through a number of dangerous situations from which Roger must rescue him. In the process, Roger suffers extravagant injuries and humiliations reminiscent of those in classic Tex Avery cartoons while Baby Herman remains unscathed. For both book adaptations, Baby Herman was murdered, leaving behind a doppelganger for Eddie Valiant to help solve the crime.

In the film, Baby Herman's role was significantly downplayed. In one scene, he is tipping off Eddie about the whereabouts of Marvin Acme's will, saying that Roger didn't murder Acme, and is the first Toon on the scene at the Acme Factory after Valiant's battle with Judge Doom.

Despite his name and appearance, "Baby Herman" is actually a middle-aged, cigar-smoking Toon who happens to look like an infant. While filming "in character", he speaks baby talk in a typical baby boy's voice provided by April Winchell; off-camera, he has a loud, gravelly voice provided by Lou Hirsch. Animation director Richard Williams loved the character of "adult" Baby Herman so much that he personally animated all of the scenes of the character in the film. It should be noted that when he loses his cigar and finds himself unable to reach it, he actually starts crying like a baby (albeit with his voice still sounding like a middle-aged man). 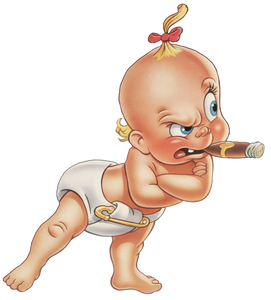 Add a photo to this gallery
Retrieved from "https://hero.fandom.com/wiki/Baby_Herman?oldid=1764206"
Community content is available under CC-BY-SA unless otherwise noted.