She was voiced by Terri Hawkes (1985-1987), Tracey Moore (1988), Holly Gauthier-Frankel (who also voiced Fern Walters in Arthur) in Care Bears: Adventures in Care-a-Lot and Olivia Hack in Care Bears: Welcome to Care-a-Lot.

She has baby pink fur and her Belly badge was originally a yellow Starbuddy peeking out of a pink heart, which was changed to a plain yellow star the middle of a pink heart beginning with the 2007-2008 Adventures in Care-a-Lot series.

She has had slight design changes over the years, sporting a small pink bow in her first appearance in Care Bears Battle the Freeze Machine, and wears a heart barrette in her hair in Adventures in Care-a-Lot.

She is a sweet, curious, and loving, Baby Hugs has all the makings of a full-fledged future Care Bear. Almost never seen without her brother Tugs, the two always seem to get themselves into crazy situations thanks to their boundless curiosity and playful attitudes. Watching them is practically a full-time job, but it's one that Grams Bear is more than happy to fulfill.

She made her first animated appearance in the 1984 television special The Care Bears Battle the Freeze Machine, and has since popped up in nearly every future incarnation of the series. 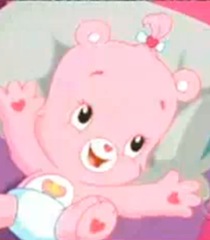 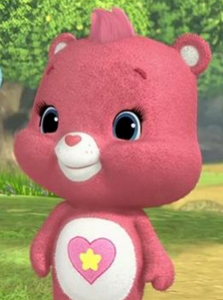 Baby Hugs Bear from Care Bears: Welcome to Care-a-Lot
Add a photo to this gallery

Retrieved from "https://hero.fandom.com/wiki/Baby_Hugs_Bear?oldid=1618036"
Community content is available under CC-BY-SA unless otherwise noted.