Plumber (as an adult)

Baby Luigi is the infant form of Luigi. He first appeared in Yoshi's Island: Super Mario World 2 for the SNES in 1995.

Baby Luigi resembles an infant version of his adult form with brown hair and a green cap with an L on it.

In the Yoshi's Island games, he had a set of diapers, but in other games he wore a green shirt and blue overalls.

In the Mario Kart games, he was capable of driving the series signature Karts.

In Mario Superstar Baseball, he demonstrated being able to swing a bat.

Baby Luigi was kidnapped by Kamek and Baby Bowser along with the stork, but Yoshi and Baby Mario rescued him. 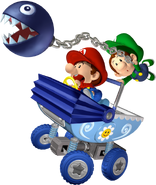 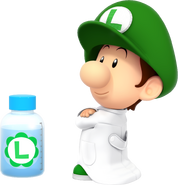