Spending time with his adoptive mother Rosalina and his Luma members.

Be Mario's guide and help him on his quest (in the Super Mario Galaxy series; succeeded).

Save Mario, the cosmos and the entire Universe by sacrificing himself (in Super Mario Galaxy; succeeded).

Baby Luma was found in a rusted spaceship by a young Rosalina. He tells Rosalina he is looking for his mother, who is coming for him on a comet. Rosalina promises to wait with him, and that night, she used her father's telescope to look for Luma's mother, but there was no sight of the comet. Rosalina and Luma decided to go look for Luma's mother themselves by using the rusted spaceship.

During their journey, they find a comet, but Luma's mother was nowhere to be found there. The pair decided to stay in the comet for a little while.

After Rosalina dreams about losing her mother and starts crying, Luma starts crying as well, before Rosalina calms him down. She says to Luma that she will take care of him.

The next day, Rosalina and Luma made a house of their own.

One day, several Lumas come out from a apricot-colored planet. Rosalina decided to move the Lumas in the new house once she had finished naming them all.

After seeing the 100th comet, Rosalina wonders if her home planet was still as blue as it was. She used her father's telescope and saw a terrace which used to be her home. She started remembering the memories she had with her brother, father and mother, but when she remembered her mother, she started bursting into tears.

Luma tried to comfort Rosalina by saying that her mother is a part of her, but Rosalina was unable to stop her tears. Then, Luma gets an idea. He could transform into a soaring comet that will carry Rosalina and all the Lumas on the journey. Luma emerged, reborn as a comet. He flew towards Rosalina's home planet.

In the final chapter of Rosalina's storybook, there is a new Luma in Rosalina's new family. It is possible it is the same Luma Rosalina traveled with. 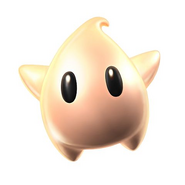