Baby Sinclair is the youngest member of the Sinclair family from the TV show Dinosaurs. He was performed and voiced by Kevin Clash (who also voiced Elmo on Sesame Street).

Newly hatched in the premiere episode, "The Mighty Megalosaurus," Baby Sinclair is a precocious if bratty child. His catchphrases include "I'm the baby, gotta love me!" and "Not the mama!" The latter is often uttered to his dad, Earl Sinclair, whom the baby repeatedly batters with a frying pan, and generally disdains, especially in the early episodes, though they form a slightly warmer relationship over time. The baby's relationship with mother Fran Sinclair is more stable and mutually affectionate, but the dinosaur child's wisecracks are also aimed at siblings Robbie and Charlene. Grandmother Ethyl often reads to the child, the pair both rejoicing in Earl's many blunders. Also, Baby Sinclair is quite intelligent, being able to speak and spell at a very young age. Never formally named until near the end of the second season, the infant Sinclair is briefly named "Aaah Aagh I'm Dying You Idiot," the result of the then-Chief Elder keeling over during the official christening. By the episode's end, he has been legally named "Baby Sinclair."

Baby Sinclair celebrated his first birthday in "Switched at Birth". He celebrated his second birthday in "Terrible Twos", where he entered a stage called the "terrible twos", causing him to display demonic behavior during the year that he's two. The Sinclairs finally tricked the Baby into thinking he was three years old.

Baby Sinclair was also the most heavily marketed of the show's characters, appearing in assorted toys, Happy Meal prizes and the music video "I'm the Baby (Gotta Love Me)". He was featured on the box art of most Dinosaurs video releases and was the only character to appear outside of the series, serving as a co-host on the special For Our Children. 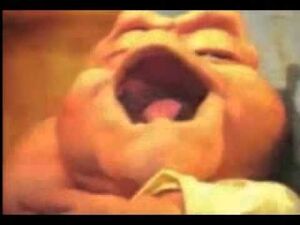 Baby's scream after he hurt himself 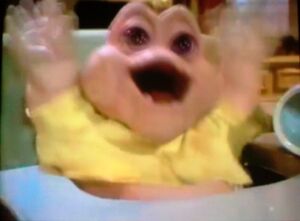 Baby's breakdown.
Add a photo to this gallery
Retrieved from "https://hero.fandom.com/wiki/Baby_Sinclair?oldid=1915231"
Community content is available under CC-BY-SA unless otherwise noted.