Baby Tugs Bear is a Care Bear cub and twin brother of Baby Hugs Bear. Along with his twin sister, he made his first animated appearance in the 1984 television special, The Care Bears Battle the Freeze Machine, and became a special character in nearly every episode and movie of said series.

Tugs has baby blue colored fur and his Belly badge formerly was a yellow Starbuddy resting inside a blue cloth diaper. His Belly Badge was changed in the 2007-2008 series Care Bears: Adventures in Care-a-Lot to a red heart inside a yellow star.

In Tugs' own mind, Tugs is a full-fledged, full-grown Care Bear, and can be really brave, though he is hardly ever without his twin sister. They both get along, but like every brother and sister, they sometimes fight.

Naturally curious and playful, Tugs and Hugs have a habit of getting into trouble, and are usually looked after by Grams Bear, Grumpy and Champ Bear. In Adventures in Care-a-Lot, the twins are looked after by Cheer Bear. 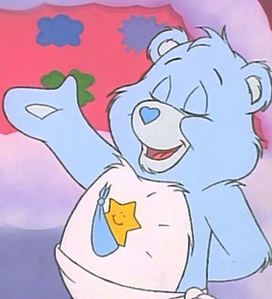 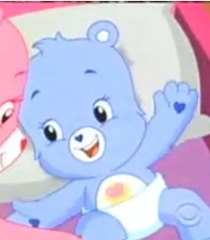 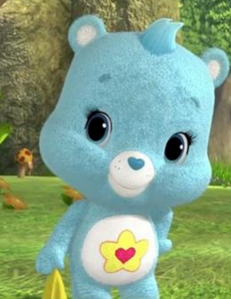 Baby Tugs Bear from Care Bears: Welcome to Care-a-Lot
Add a photo to this gallery

Retrieved from "https://hero.fandom.com/wiki/Baby_Tugs_Bear?oldid=1642099"
Community content is available under CC-BY-SA unless otherwise noted.