Bounty hunter (as an adult)

Attracting coins and other magnetic objects with his magnet.

Having fun with Baby Mario and other babies.

Greedy Infant
Baby Wario is the infant form of Wario and one of five baby characters from Yoshi Island DS.

Baby Wario is one of the five baby characters playable in Yoshi's Island DS. He is unique to this game, created specifically for it. He uses a magnet to attach to magnetic blocks and grab coins throughout the game. He has also appeared as a doctor in Dr. Mario World.

He is Wario's younger self before he becomes an rival of Mario in Super Mario Land 2: The Six Golden Coins.

Baby Wario is greedy, stubborn and loud. He uses his magnet to attract any coins he comes across and tends to argue with Baby Bowser.

When Baby Wario was originally kidnapped, the Toadies found his crying to be very annoying, so they left him alone in World 3-5. Some time after that, Yoshi, who has been washed away by a large wave and separated from the Stork and other babies, finds him. Baby wario joins Yoshi and the babies to stop Bowser. He gets into a fight with Baby Bowser near the end of the game about Treasure. 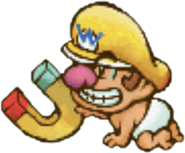 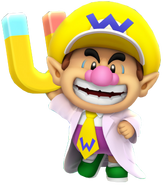