In Super Mario World, red, yellow, and blue Baby Yoshis are only found in Star World, where they hatch from eggs of the same color whenever Mario makes his approach. Feeding the Baby Yoshis five enemies will make them turn into adult Yoshi; however, if a baby Yoshi eats any power-up, it will grow up instantly. Also, all the eggs Mario rescues from the Koopalings hatch into Baby Yoshis during the ending cutscene. Yoshi himself hatches directly into an adult when Mario uncovers his egg, but this is because Bowser trapped Yoshi in the egg. Unlike their adult counterparts, Baby Yoshis can't use their tongues to eat objects. It only eats anything that it makes contact with it like when Yoshi eats a berry.

In the Game Boy Advance remake Super Mario World: Super Mario Advance 2, once a Baby Yoshi is found in Star World, it is possible to find their colorations in lieu of Green Yoshi inside any ? Block containing a Yoshi Egg. However, these Yoshis will not remain as babies. Instead, they will grow straight into adults like Green Yoshi. Mario's present form will determine what color Yoshi Egg will come out of the ? Block upon hitting it.

Green Baby Yoshis are used as a stamp for the art mode and an instrument for the music mode in Mario Paint. The Baby Yoshi makes its original sound effect in the music mode.

Baby Yoshis in this game run away like their adult counterpart if a player carries one while coming in contact with an enemy (if hit in the back). Like in Super Mario World, if the Baby Yoshi comes in contact with certain enemies, it will eat it. Unlike their adult counterparts, Baby Yoshis (minus Glowing Baby Yoshis) follow the player into the End-of-Level Fortress. Baby Yoshis periodically appear on the World Map, and can be picked up and used in levels that normally do not have Baby Yoshis (minus Castle or Tower stages). Baby Yoshis can be kept until the player loses them; if there are multiple players, all players can continue to use Baby Yoshis as long as one player finishes the level with one. While swimming with Baby Yoshis, the player's swimming style resembles that of one who bears the Frog Suit or Penguin Suit, and the Baby Yoshi's normal abilities are replaced by an underwater spin maneuver that gives the player a speed boost. Baby Yoshis can't eat berries. Baby Yoshis also vocalize to the music when picked up.

Baby Yoshi is the young version of Yoshi in the Super Mario World television series episode "Mama Luigi". He differs from the Baby Yoshis of the Super Mario World game; Baby Yoshi is shown to be able to move on his own and use his tongue as a baby, was able to eat many enemies without growing, and did not possess any shoes on his feet either. He knows how to talk right from birth, but mistakes the first person he sees, Luigi, for his mother.

A Yellow Baby Yoshi known as Little Yoshi appears in the game Tetris Attack. He appears to be Yoshi's friend, although their relationship is not clarified.

Baby Yoshis appear in the game Yoshi and can be seen on the title screen. If the player puts two egg pieces together a Baby Yoshi will appear, but will not give as many points.

The Yoshis in Yoshi's Story were newborn—however, they looked different from Super Mario World's Baby Yoshis, and instead had the appearance of the adult Yoshis. During the story sequences at the beginning and ending of the game, they were shown to have smaller and less developed bodies in contrast to the Yoshis seen only on the very first page in the intro. The Baby Yoshis in this game act unlike those of Super Mario World, as they have most of the abilities an adult would have, such as the Flutter Jump, Ground Pound, and the ability to stick out their tongue to eat Fruits and enemies. The Baby Yoshis also have the ability to lay eggs in Yoshi's Story, despite being newborn.

A green Baby Yoshi makes an appearance in Yoshi's Island DS. After the six original star children are shown during the credits, a Baby Yoshi hatches as the seventh star child.

In Super Mario RPG: Legend of the Seven Stars, a pudgy Baby Yoshi appears as an inhabitant of Yo'ster Isle; Mario can feed this Baby Yoshi Yoshi Cookies.

A group of Yoshi children calling themselves the Fearsome 5 were encountered on Lavalava Island in Paper Mario. When they were first encountered, they were being watched over by Sushie, though they were thinking up plans of their own. When Mario later returned to the village after he discovers that the path to Mt. Lavalava is inaccessible, the older Yoshis are going berserk over the Yoshi children's sudden disappearances. Mario helped Sushie down from the tree that they trapped her in and found all five Baby Yoshis.

A Baby Yoshi appears in Paper Mario: The Thousand-Year Door as well, joining Mario's party after hatching out of an egg he had previously obtained. While in the English version he is referred to as a Yoshi, the Italian version more specifically refers to him as a Miniyoshi, further explaining that Miniyoshis are Yoshis just hatched from the eggs (Miniyoshi itself is a translation of チビヨッシー, which is the Japanese term for Baby Yoshi).

Despite being a newborn Yoshi, he is already able to talk, to lay eggs (with his Mini-Egg move), to carry Mario on his back and to flutter while carrying him. He is however able to jump only without Mario on his back, as seen in his Ground Pound move.

In Game & Watch Gallery in Fire, Baby Yoshi is one of three patients that need to be rescued from a burning castle. It is heavier than the Toad, however.

In Game & Watch Gallery 2, Baby Yoshis appear as parachutists in Parachute. Unlike the Toads, their descent speed can heavily vary.

In Chef, Princess Peach has to feed a Yoshi, but if she feeds it overcooked food, it will revert into a Baby Yoshi. If she feeds a Yoshi enough cooked food though, it'll release an egg, which contains a Baby Yoshi.

In Game & Watch Gallery 3 in Egg, if Yoshi eats enough cookies, he will lay an egg, which will eventually hatch into a Baby Yoshi. The Baby Yoshi assists Yoshi by temporarily eating cookies at a random angle.

A Baby Yoshi also appears during the credits, from an egg thrown by an adult Yoshi.

In Game & Watch Gallery 4, the Baby Yoshi reprises its roles in Fire and Chef. 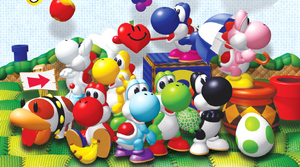 The eight Baby Yoshis from Yoshi's Story, along with Poochy.
Add a photo to this gallery

Retrieved from "https://hero.fandom.com/wiki/Baby_Yoshis?oldid=2001190"
Community content is available under CC-BY-SA unless otherwise noted.